I didn’t even consider taking photos in the bath, so any of the following images of the interior come from TripAdvisor. I don’t actually have permission to use them, so if they disappear you’ll know why.

The clean white dome of the ceiling arched overhead, broken only by concentric circles of cutout royal blue stars, windows to the sky above and the deepening twilight without. The hexagonal marble slab on which I sat was heated to a temperature just shy of scalding, so I lay back slowly to avoid shock from the abrupt temperature change. As I relaxed and tried to let my muscles release, I closed my eyes, waiting for Fatih to come for me, not really knowing what to expect. As he approached, I was struck by the thought that, “my underwear are on backwards.” 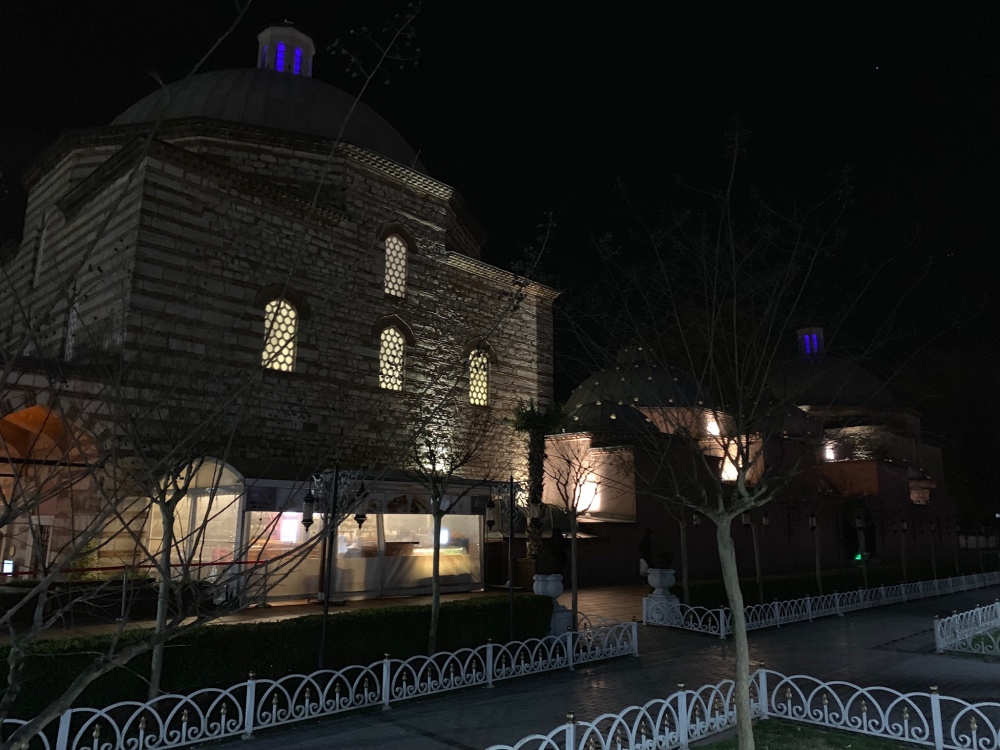 I was in the Ayasofya Hurrem Sultan Hamam, having come at last to a Turkish Bath. My plan had been to go to the hotel spa for a massage tonight, but they only have limited appointments and Dan is there for the third evening in a row and making incredible progress with his right foot. The masseur there is very skilled and I am glad to see him making so much improvement.

Tonight I decided that rather than wait for him (I’ve often spent this time blogging) I would go out, and a number of sources had recommended this hamam. It’s probably advisable to have an appointment, but I arrived without one. Naturally the greeter made a show of hardship, but it was just a moment before he mysteriously found an opening on the schedule. I paid the fee and was led to a small private locker room where I was provided with paper underwear, a towel, and slippers. I changed and stepped out the door, where I was met by Fatih, who would be my attendant for the next two hours or so. I locked the door with a top secret four digit code and we headed into the heart of the bath. 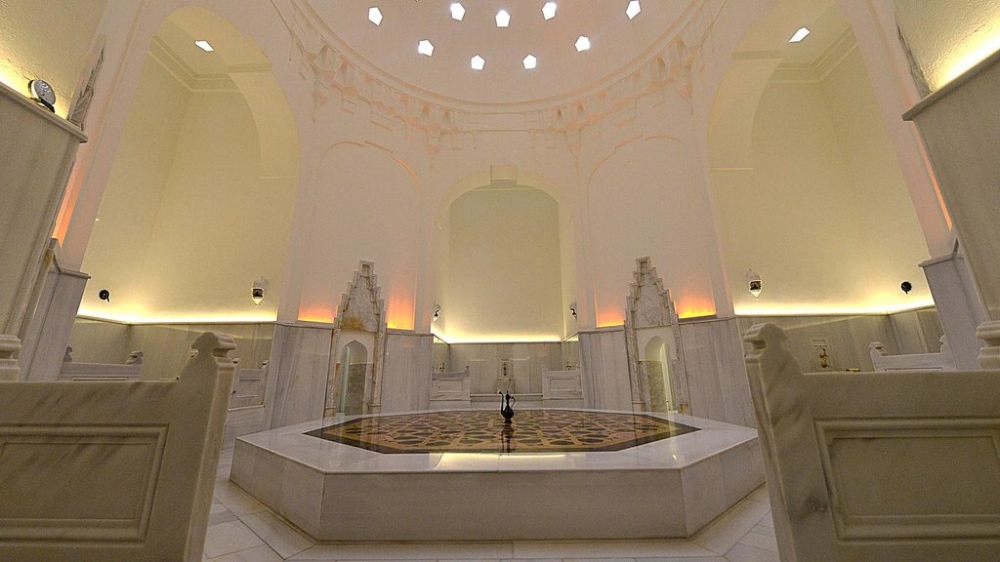 The central room of the bath is comprised of a large, humid, marble-lined room, with a large hot marble podium in the center. There are four large niches off of the central room, each of which holds three marble basins that the attendants fill with hot water. My first stop was one of these niches, where I sat next to a basin and Fatih dumped generous amounts of steaming water over me with a golden bowl. The water still running, he handed me the bowl and instructed me to wash for 10 minutes.

There is an ancient tradition of public baths in Turkey, dating back to the time of the Greeks and Romans. We have seen a number of them on this trip already. Baths were often placed near the entrance to a city so that visitors could bathe immediately on arrival. This served multiple purposes, an obvious one of which was controlling spread of disease. Less obviously, this required visitors to remove their clothing so it could be searched while they bathed.

When Fatih returned, we crossed to the niche on the opposite side of the room. I’m not quite certain why we had to move, as it was identical to the first niche, and nobody else was in the bath. He then used a mildly abrasive glove to wash me from head to toe. I tend to overthink things like this and was torn between thoughts of decadence and thoughts of orangoutangs picking each others’ fleas.

The bath was followed by a mud mask and another period of 5 minutes waiting and doing nothing. So there was plenty of time for me to ruminate over what I was doing and consider whether this was weird or awesome.

See this picture? It’s from the hamam’s website. It’s complete bullshit. There were no musicians and there is no fruit in the bath area. And only a fool would be standing on that platform, but …. well, more on that later.

After the mud mask I returned to the central marble platform for a literal bubble bath. Fatih made enormous piles of bubbles over me as I lay there, and then he massaged the soapy water into my sore muscles. At some point in this process, while working on my shoulders, Fatih reached his leg over and straddled me, which is something I’ve never before experienced in a massage. And I don’t expect it’ll be happening at home any time soon.

Finally I was asked to cross back to the niche one more time for a cool rinse. This was a test, of sorts. With my soapy wet feet, walking across the wet marble surface was an open head injury waiting to happen, and I imagined pools of blood forming on the vast marble surface. At least it would clean up easily.

Having survived this hazardous challenge, Fatih guided me back to the outer antechamber where I lounged with black raspberry juice, tea, water, and Turkish delight until finally he took me upstairs for an aromatic oil massage. 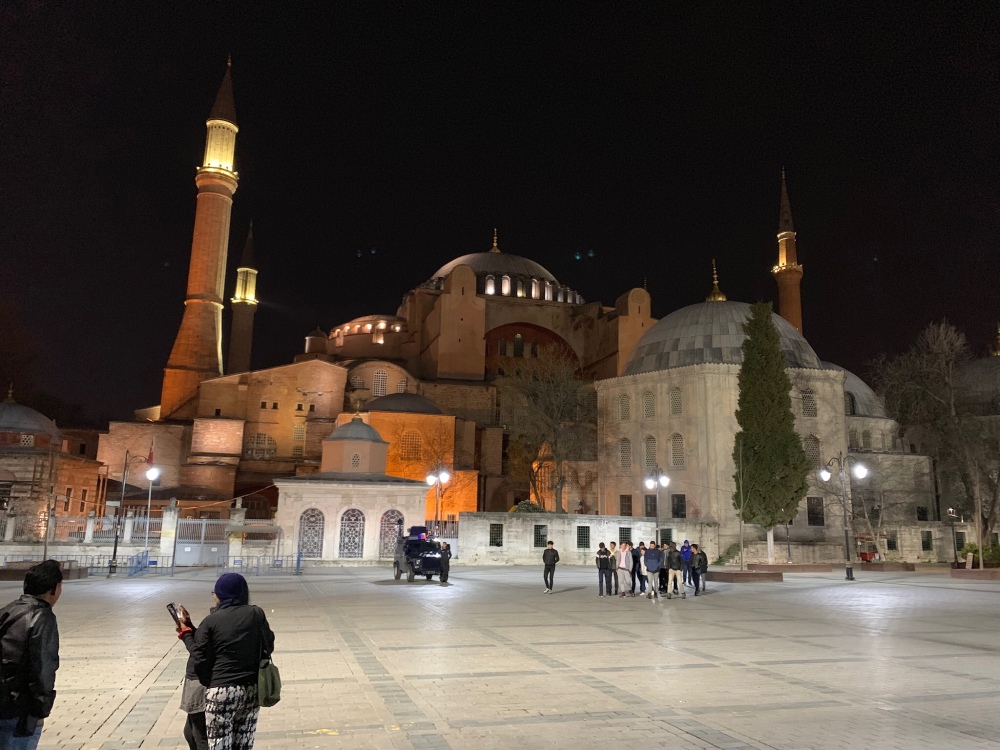 Clean and fragrant, I stepped back into the Istanbul night, all hints of sunlight having disappeared well beyond the horizon to the west. The Hagia Sophia crouched in pink, illuminated in front of me, and the Blue Mosque stood behind. I returned to the hotel where Dan reported having a very similar experience tonight and was continuing to feel much better and more mobile. In comparing experiences, I suspect that he has a much more talented masseur, whereas I may have had a more immersive experience. 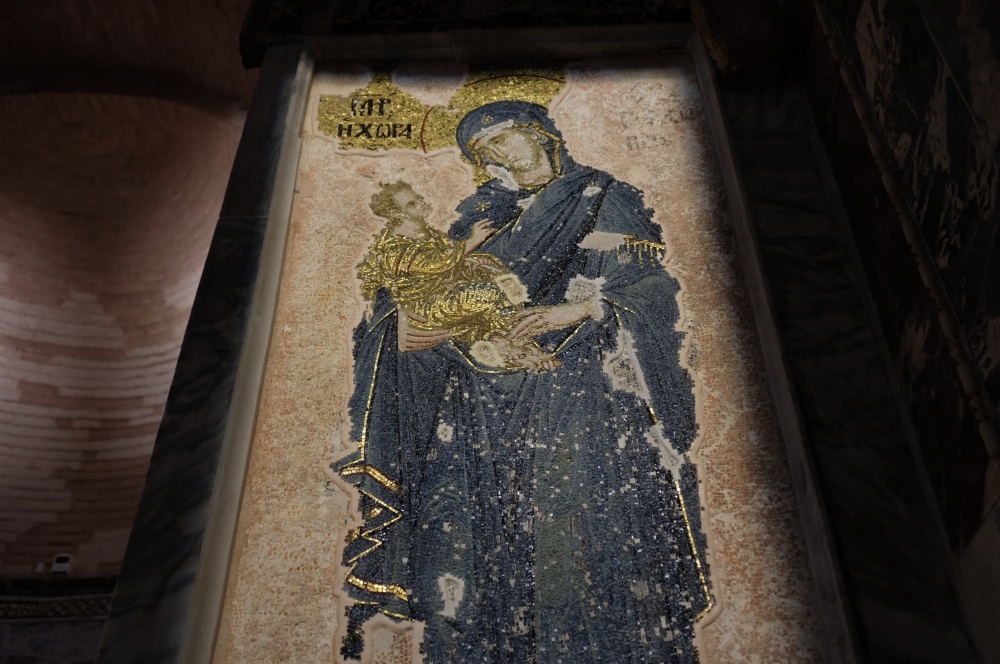 The earlier part of the day was less exciting, with the usual visits to amazing mosaics at the Chora Choir Church Museum… 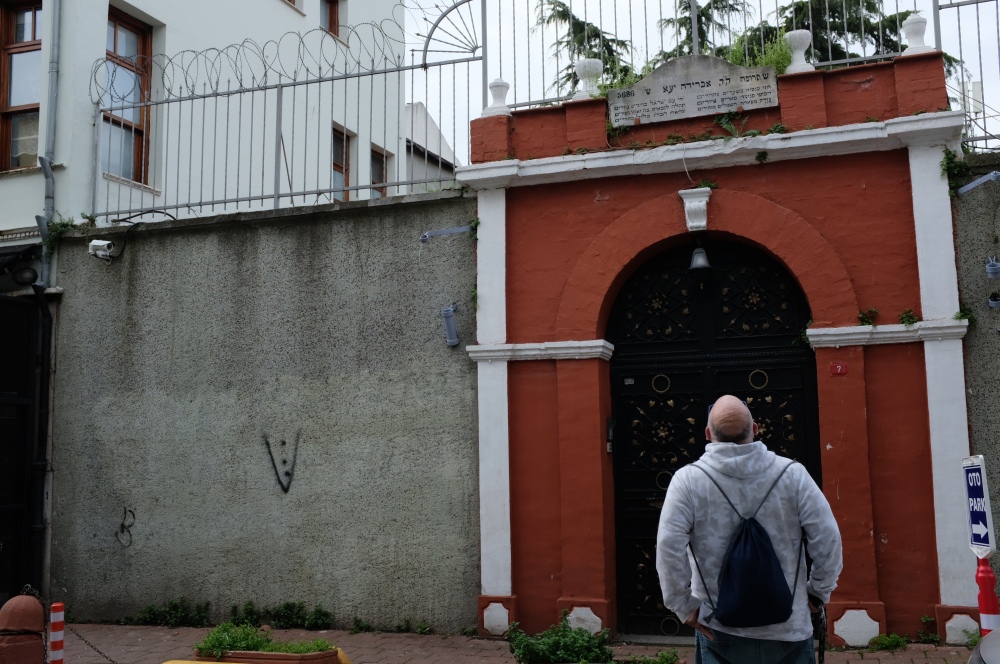 And identifying the synagogue in the trendy Balat neighborhood (here’s a hint from Dan – when traveling overseas, the synagogue can often be identified by the accompanying barbed wire) 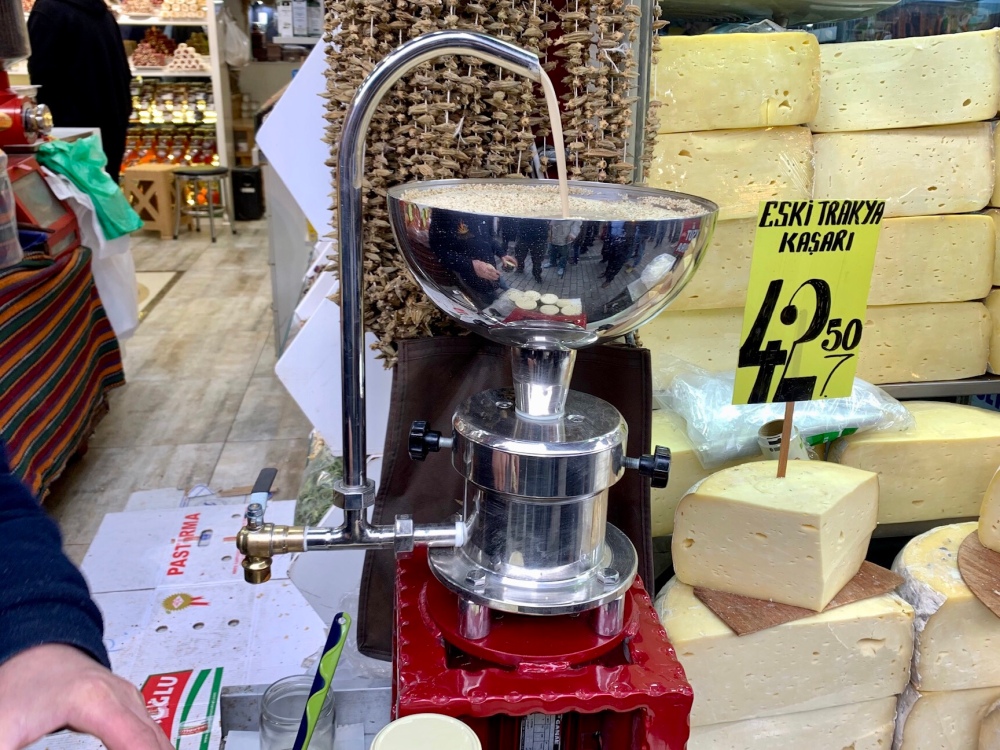 We of course went back to the Spice Bazaar, and this time we found a tahini fountain spouting freshly ground tahini. This was absolutely intriguing, and it was definitely more benign than my disastrous, but amusing, attempt at haggling. I really need to stop doing that. 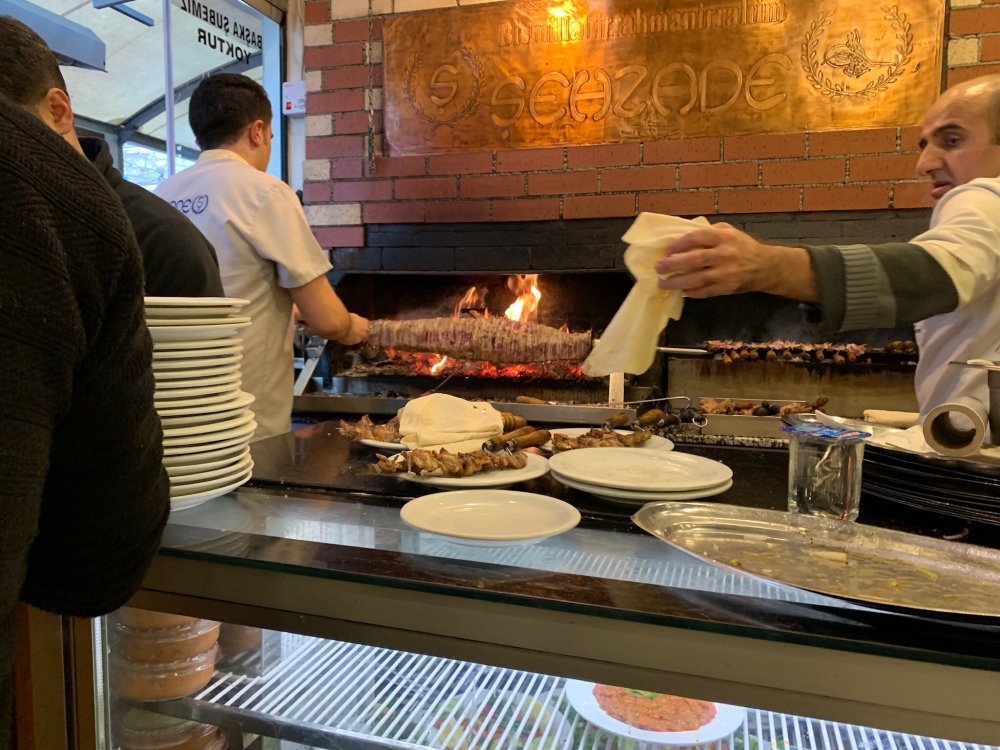 We finished the afternoon by stumbling upon one of the best restaurants for doner in Istanbul. Technically, this is cağ kebabı, rather than doner, as it’s cooked on a horizontal (not vertical) spit and the meat is served on skewers. Whatever it’s called, it is delicious. 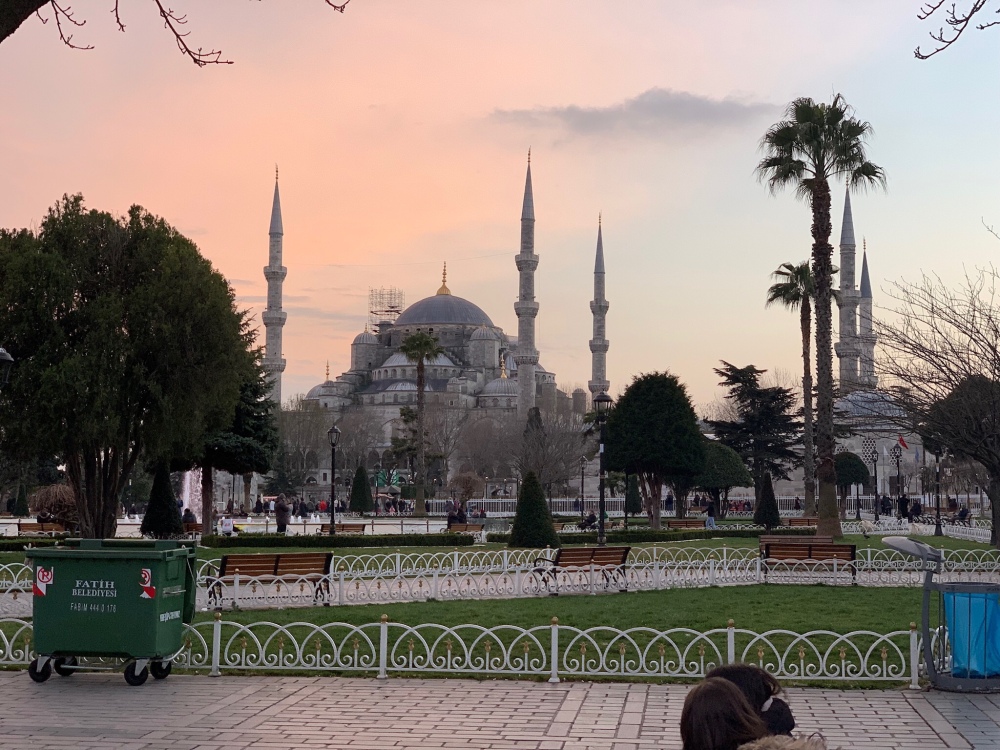 So it was that in the gloaming twilight, and sated, the day had wound down and I crossed Sultanahmet Square on my way to a fantastic, if not downright absurd, evening in the hamam.