The ferry pulled away from the dock at Eminönü, and into the bustling waterway that is the Bosphorus, the narrow blue line that connects Black Sea to the east with the Marmara Sea, and eventually the Aegean, to the west.

We motored south, the hills of the European coast growing smaller behind us, and gulls skimming up and down along unseen currents woven into the air of our wake.

To our east, a school of fishing boats clustered over what was clearly a favored spot, both for predator and prey. Further down the river, through the morning haze rose the towers of the nearest of three bridges across the 19 mile long strait that divides Europe from Asia here. 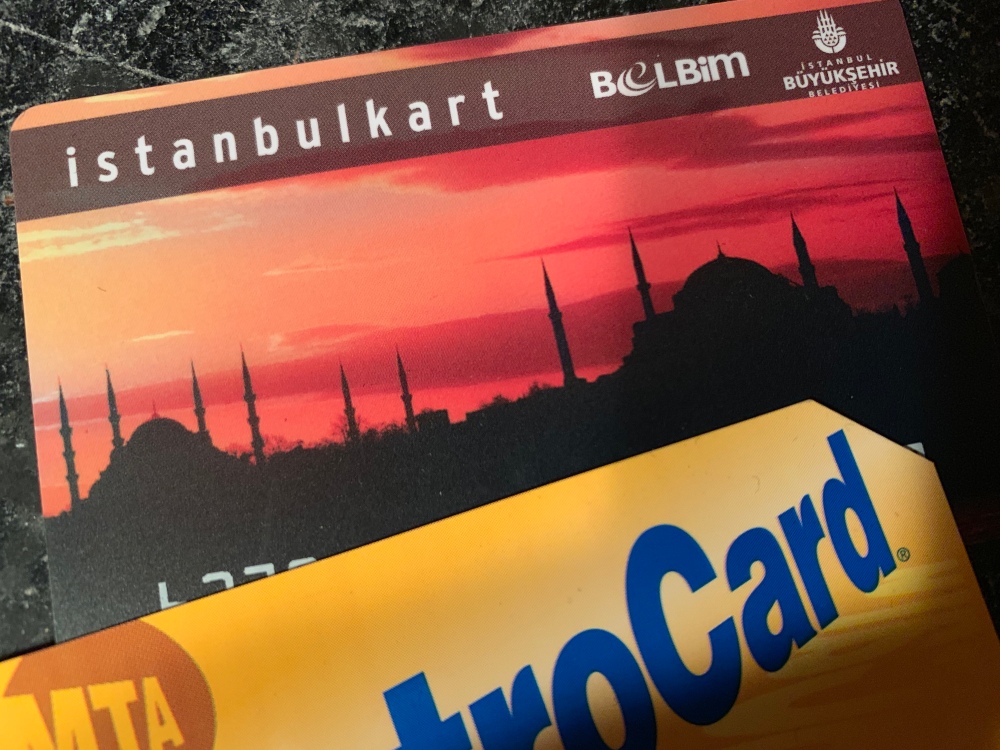 When we boarded the ferry, neither of us could figure out the price, so I just loaded plenty of Turkish lira onto my IstanbulKart, and we went for it. The actual cost had been 3 lira, so a little under $0.60 for each of us.

The ferry carried to the Kadikoy neighborhood, which sits on the Asian side of the crossing, near where the Bosphorus opens to the Marmara. At first we had been told that there wasn’t much to do on this side of the river, as most of the tourist sites sit in the European half of the city. Then again, Duygu considered, it still may be a good neighborhood to visit to start to learn the real, local Istanbul.

And indeed it was.

At first we meandered without direction into the streets immediately adjacent to the dock, finding them lined with run down buildings, cluttered shops, and a few empty storefronts. Little could be identified in the first few turnings to interest us. Nothing was bad, really, but it was clearly a local neighborhood with scant to offer the casual visitor.

We paused to sit at a bench, talking and debating our next course of action. Around us was a small concrete park adorned with other dull tubular steel seats and a lonely piece of bronze civic artwork depicting a family impressed into the side of an adjacent building.

A solitary cat licked her paw, nonplussed by our presence. A small collection of elderly locals sitting nearby were of a similar disposition.

Finally Dan and I decided that we should board a different ferry to see where it took us, hoping maybe the other end of the Bosphorus and beneath one of the great suspension bridges we had seen. 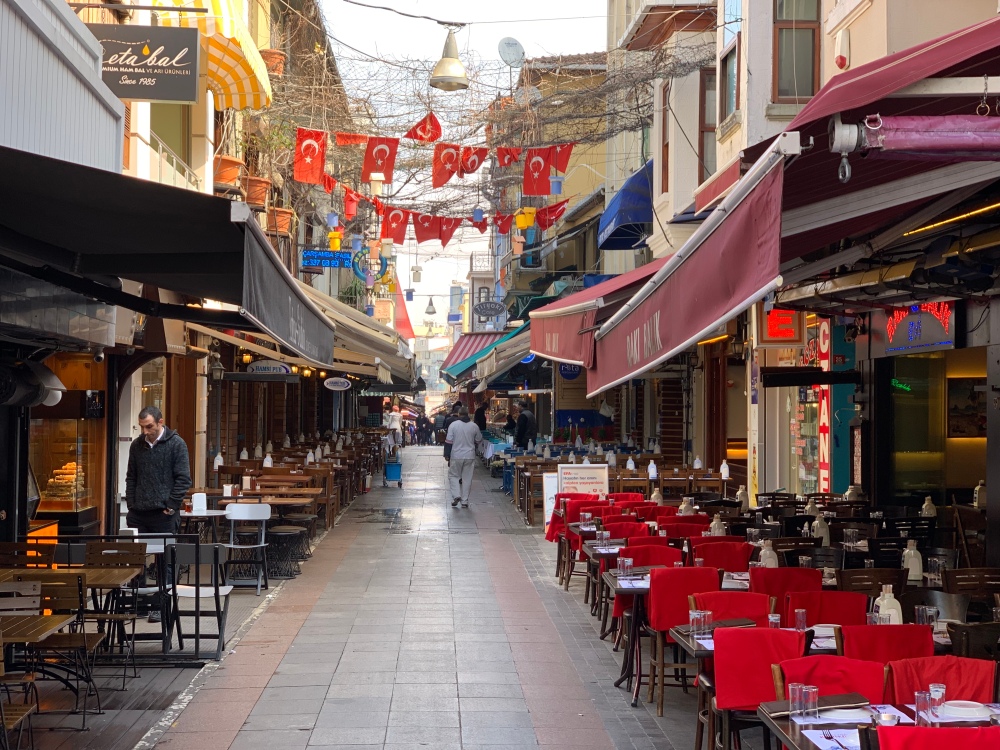 We stood up and pointed our feet toward the water when Dan spotted something down one of the streets in the distance. It looked to be a somewhat less sedentary neighborhood, so we braved the traffic and crossed the intervening roadway and found a vibrant little neighborhood with shops and restaurants galore.

First of all, I had to go into the supermarket, because they give a different view into the local everyday life than do fruit markets. In the supermarkets, we are all a little more equal. Often it’s where American culture meets foreign. And it’s fun to see things that are available in other countries that we just can’t get at home. 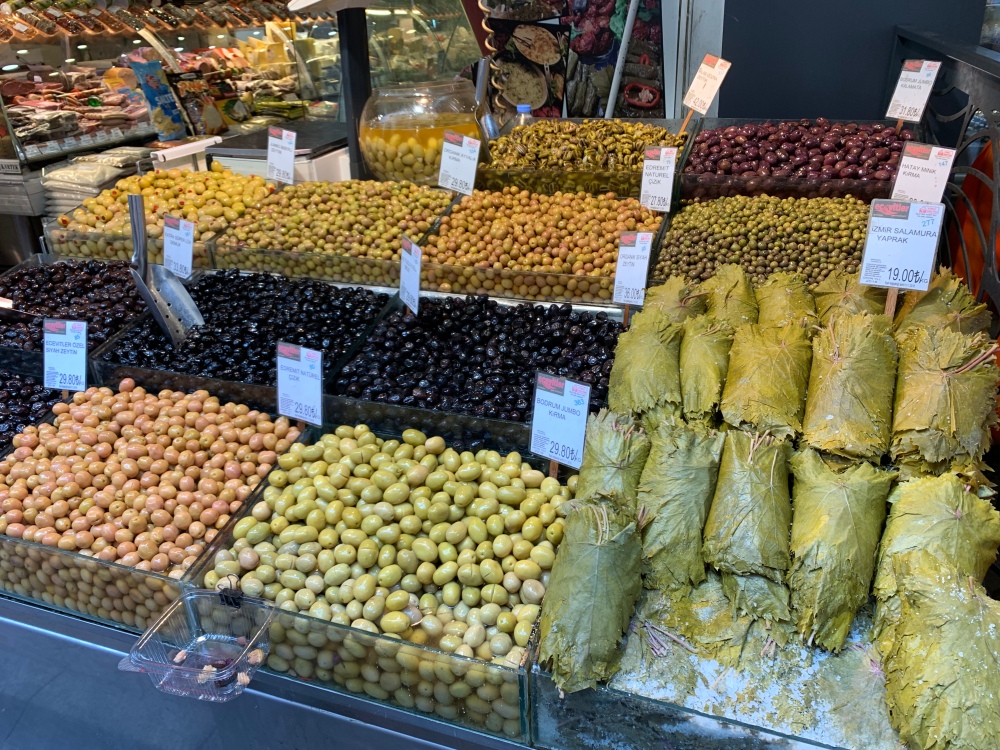 Still I can’t get enough of local street markets, and in the surrounding streets the vegetables and olives and breads were stunning. And they were selling gobs of grape leaves here, and bushels of dolmas. We were enchanted. 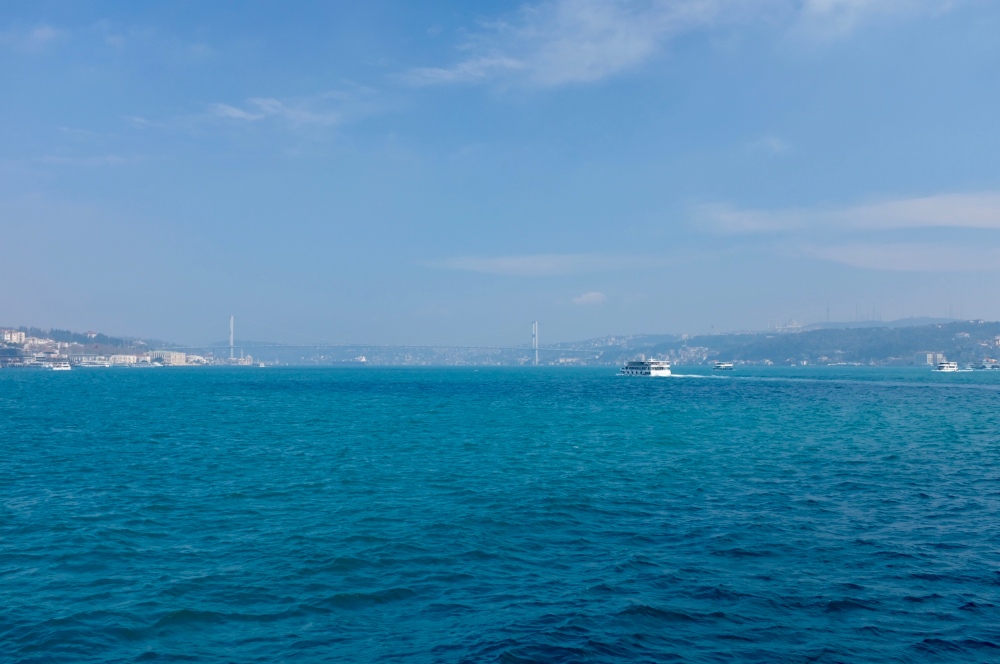 Finally after lunch we returned to the ferry and to the European side, arriving further to the east that we had started. We took the tram back to our origin, but I led us a few steps further, finding time for one last excursion.

Here at the foot of the Blue Mosque, we stood in the Hippodrome, ancient of site of chariot races. This was reminiscent of the stadium in Afrodisias, only larger. It reminded me of how happy I am that I got to visit that glorious city.

As we enjoyed the warm springtime sun a gentleman approached us and struck up idle conversation. My guard immediately went up as he spoke of the miscellany of current events in Turkey. He was happy to see that we are Americans traveling here. He wanted to practice his English. But really, his store hasn’t been busy, and perhaps he can show it to us.

Yup … a rug vendor. We declined and he tried to insist. The conversation was like a duel, his every thrust met with a parry that he defused. But we were unmoved and finally he accepted and moved along.

It wasn’t long before another pair of Turkish men came up. First they led with the proposition that they were Mormons, as though that would help. They made chatter about going to Utah, Los Angeles, and Las Vegas, joking with us for a time before springing the rug salesmanship on us. Eventually they, too, gave up.

As we passed through the historic site, salesmen would periodically accost us, one of them even asking, “How many men have tried to sell you rugs today?” But Dan had discovered that the phrase, “no chance,” is highly effective at terminating the conversation.

Tiring of the entertainment we stopped for an early dinner and collected our bags from the hotel. We had checked out in the morning, and it was time to take Dan to the airport. I, too, was going that direction because my flight tomorrow leaves at 5 am and I wanted to spend the night nearby.

The driver dropped me off at my hotel and sped away with Dan in tow. I checked into my room just as the sun was setting in the west in a fervid glow over the Sea of Marmara. Home lies that way, and tomorrow I will go there.