Without any sort of announcement or warning to mark the moment, the massive airplane gradually pulled away from the jetway at John F Kennedy International Airport and we were somehow on our way. Just beyond my window, jumbo jets were backlit by a lurid orange sky where the last tenuous rays of daylight lingered over the island of Manhattan to the west. 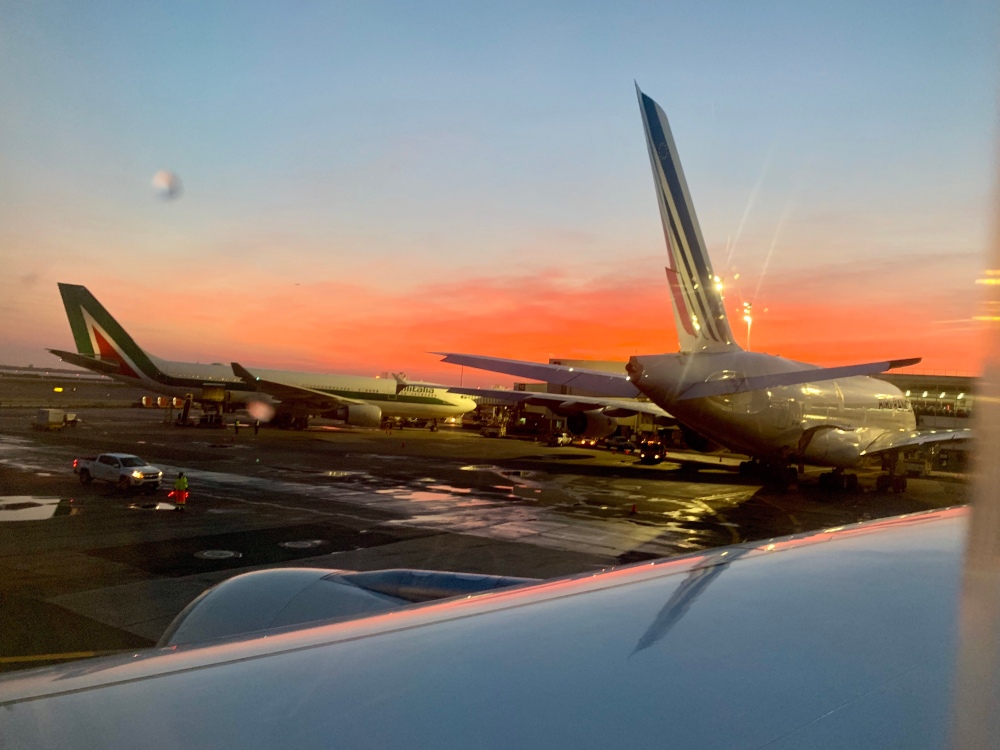 As with all of my journeys to Italy, this is a voyage that, in some sense, began years ago and has been going on for a lifetime. This particular trip, however, began in earnest last night, with a late-night flight from Detroit and an overnight stay in Manhattan. 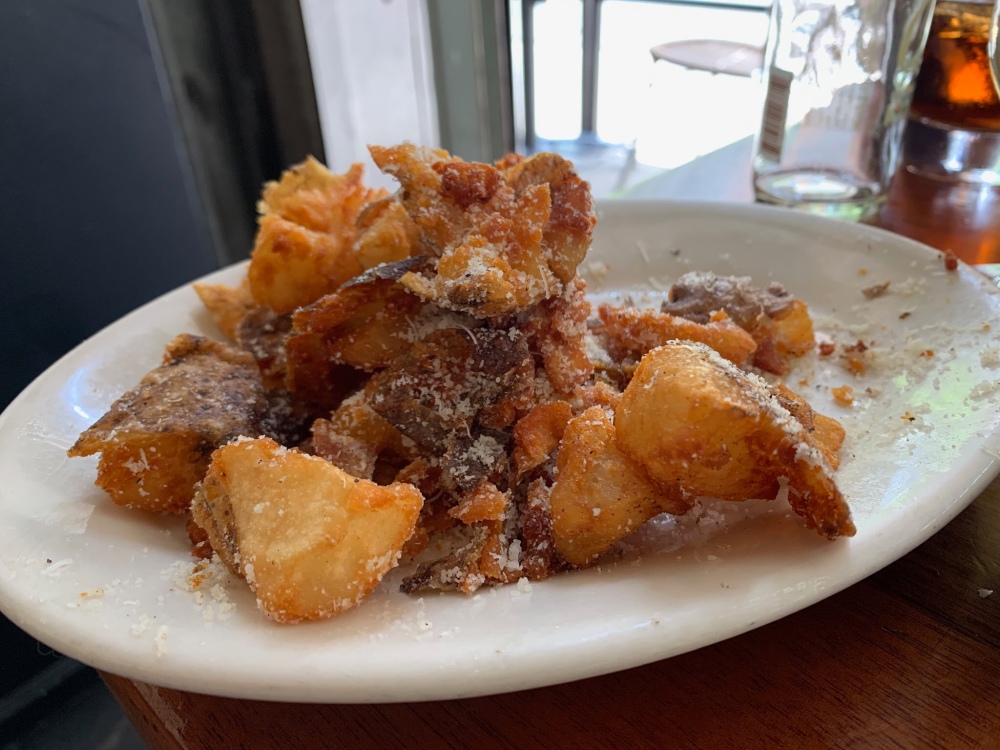 Today I had lunch with Dan, whose foot is doing much better after spending 6 weeks with it immobilized. He isn’t coming with me on this trip, and as the foot is still a little sensitive I think the extra time for it to recover will be better. At least this recovery will improve our odds of some good sailing this summer. 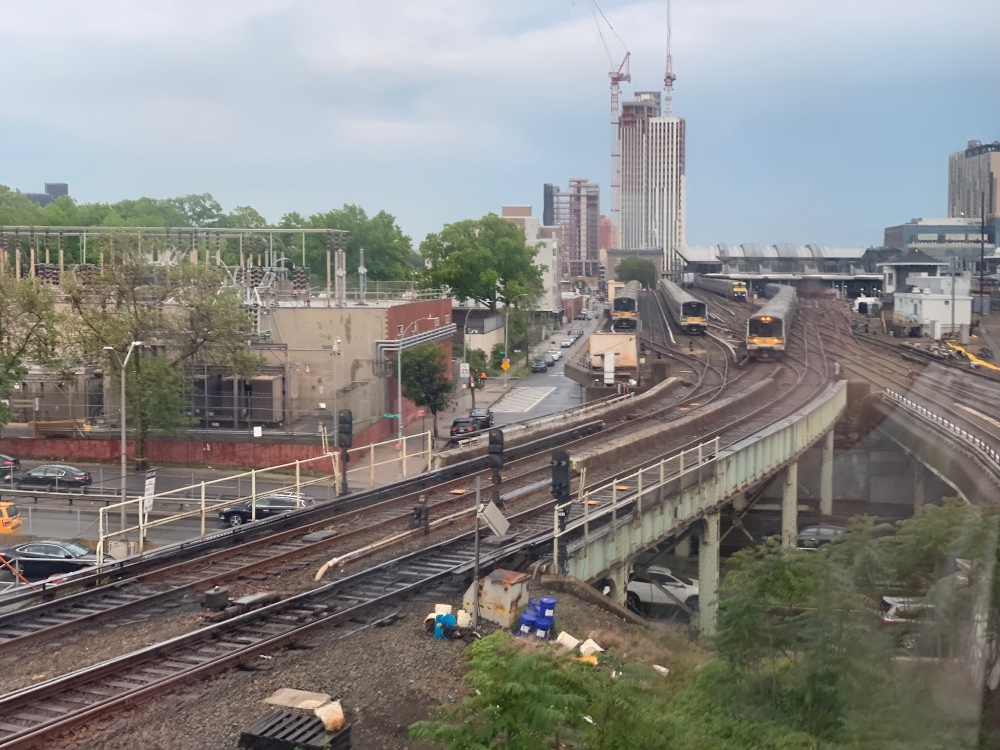 This really won’t be much of a trip for relaxation, anyway. Once again I am going to a conference, so have only a few days to myself before that begins. 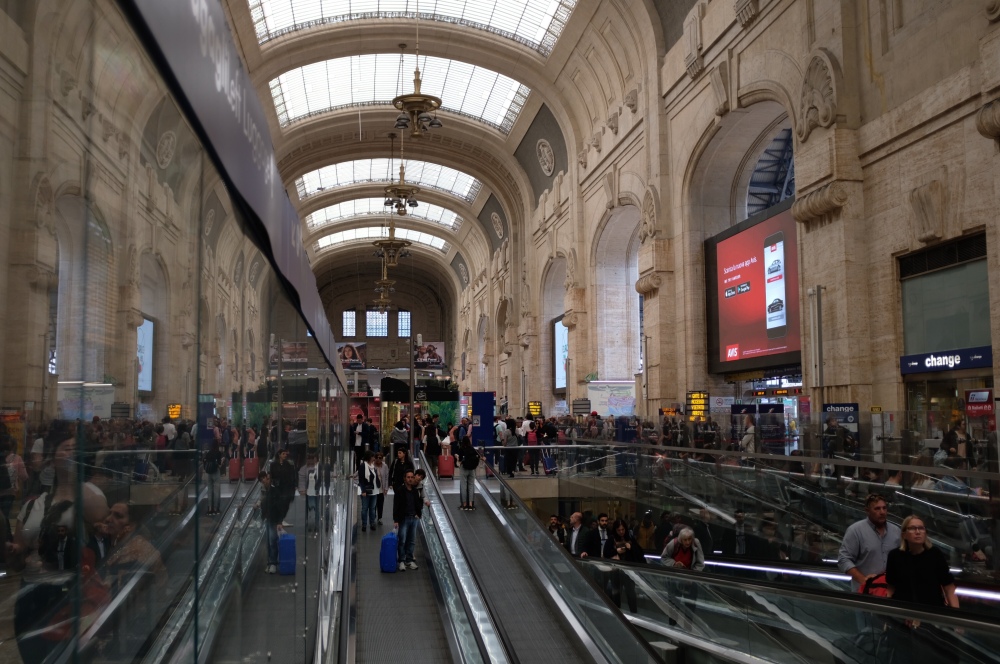 My Alitalia flight took me to Milan, from which I took the Malpensa Express local train to the main station in the central city, Milano Centrale. As I sat on the express train, I started scouting out my next train, which would ferry me from Milan to Perugia, where I will spend the next few days. This is where I ran into my first bit of trouble.

There were almost no tickets available. I’ve never had this happen before, and didn’t anticipate that I wouldn’t be able to get on a train. I had considered purchasing them a week ago, well prior to arrival, but I was worried that my flight might be delayed. Now, instead, I sat on the Malpensa Express hitting the search button again and again, with no seats showing up. Finally one popped up at 220 PM, for a train departing two hours later than I would have liked, but I took it. 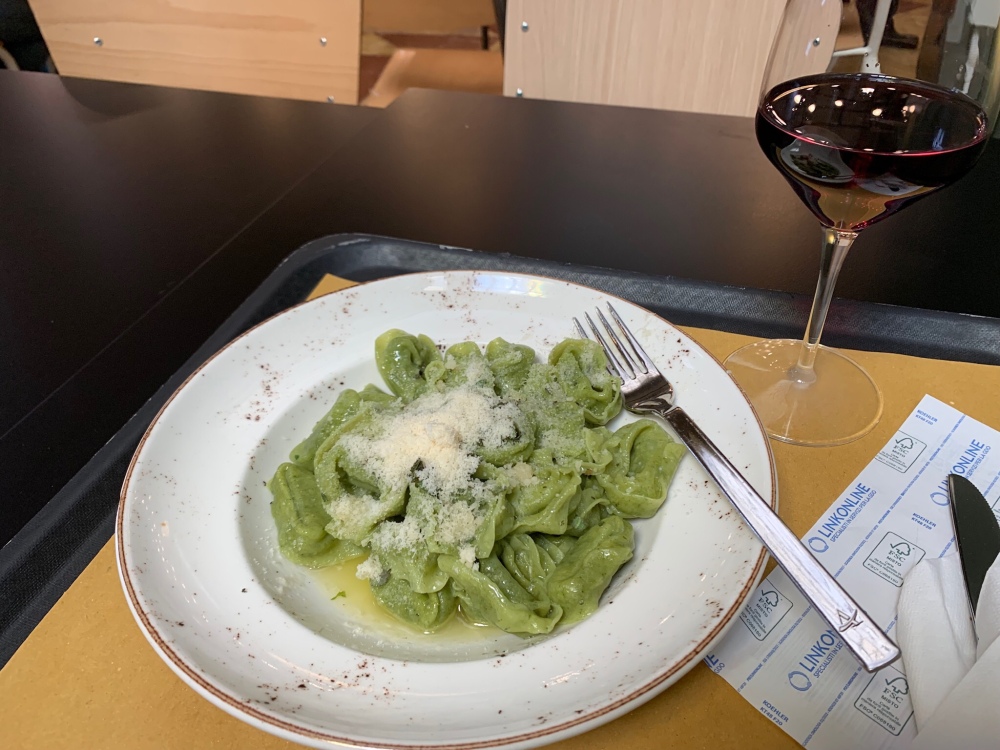 In the extra time I sat down for a lunch of ravioli at the Autogrill in the station. It’s pasta in a train station, but somehow it’s still more delicate than anything I can get back home.

The train was, indeed packed solid. At one point somebody sat in the seat across from me claiming the same seat as his neighbor. It was ultimately discovered that his ticket was booked for tomorrow rather than today. He shrugged at it. I looked at him askance, because I know that people don’t make that kind of mistake. They don’t just show up for the train on the wrong day. I’m fairly certain he had the same problem as I did, but came up with a different solution: he booked a ticket for the next day and played stupid. It seemed to work, however, as he made it to Florence without problem. 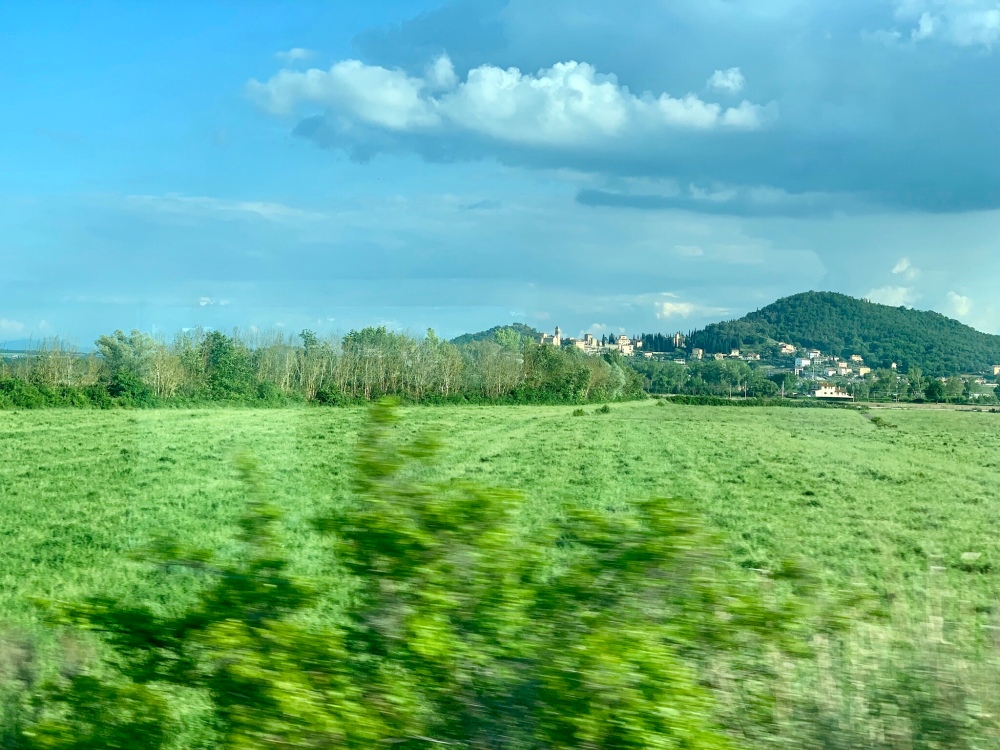 I changed trains in Florence with barely enough time to board my connecting train, which carried me southward into the green hill of Umbria and along the shores of Lake Trasimeno. This train, a simple regional train, eventually dropped me at the Perugia station at 630 in the evening. 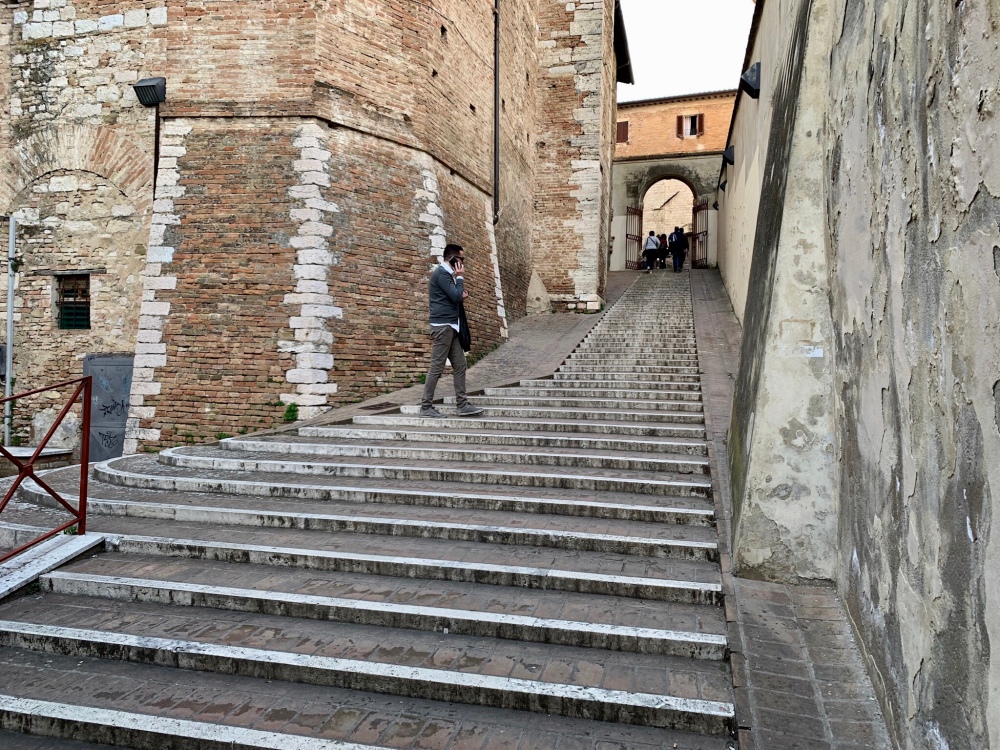 Perugia is one of numerous hill towns in the region of Umbria. These cities sit on the top of rocky outcroppings, and their train stations (if they have them) sit below the rest of the town. So I took the local public transport, the Minimetro, up into the city, where I eventually meandered my way up escalators, steps, and narrow alleys to my hotel.

I was thrilled to be here. It’s an old boutique hotel with a tiny room, a miniature wrought-iron twin bed, a half-sized desk, two power outlets, and a musty aroma perfect for welcoming a solo traveler in search of solitude. There is nothing new about it. Although it might be a bit of an exaggeration to suggest that there isn’t room to turn around in the shower, it’s about as close to being true as one can practically get. 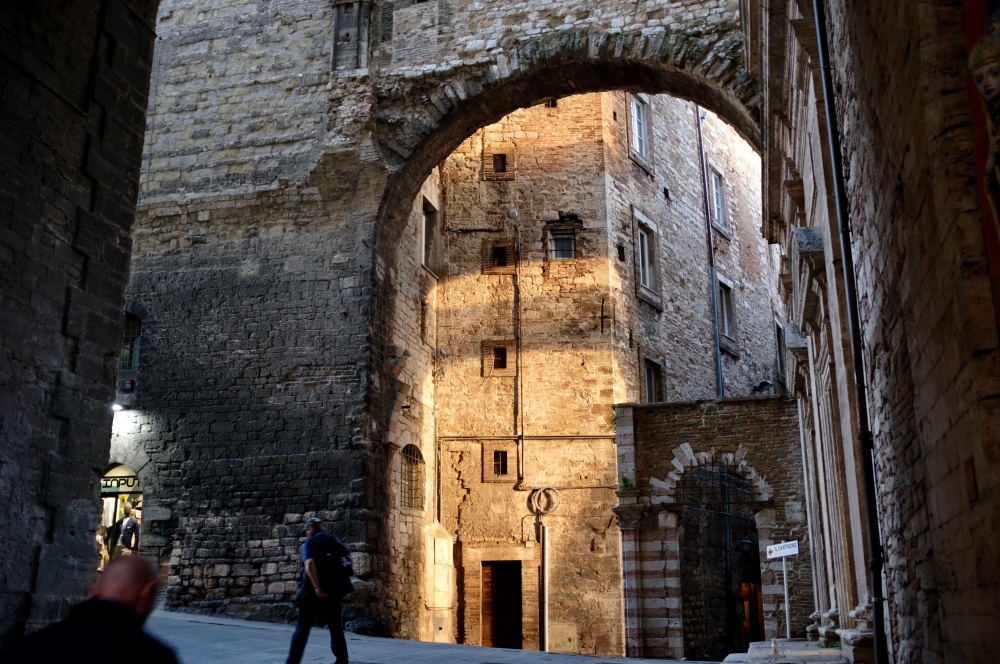 So I climbed into that diminutive shower and removed a day’s worth of musk from the road and headed out into the medieval streets of the city. I had only time tonight for orientation and for dinner. 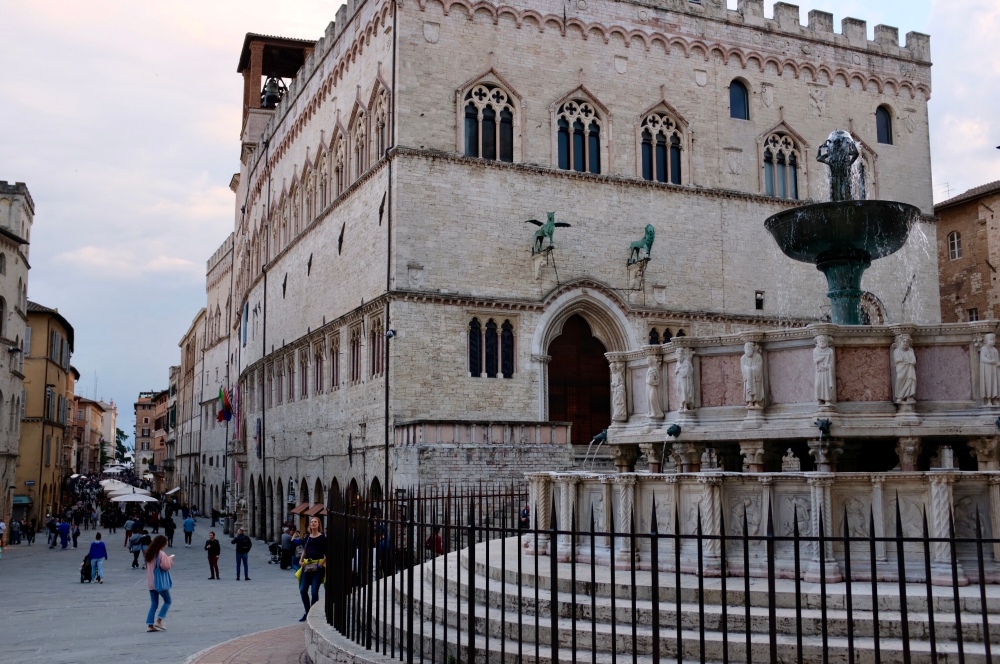 I soon found myself walking down Corso Vanucci, the central road in town where throngs of revelers prowl the early summer evenings shopping, eating, and being seen. 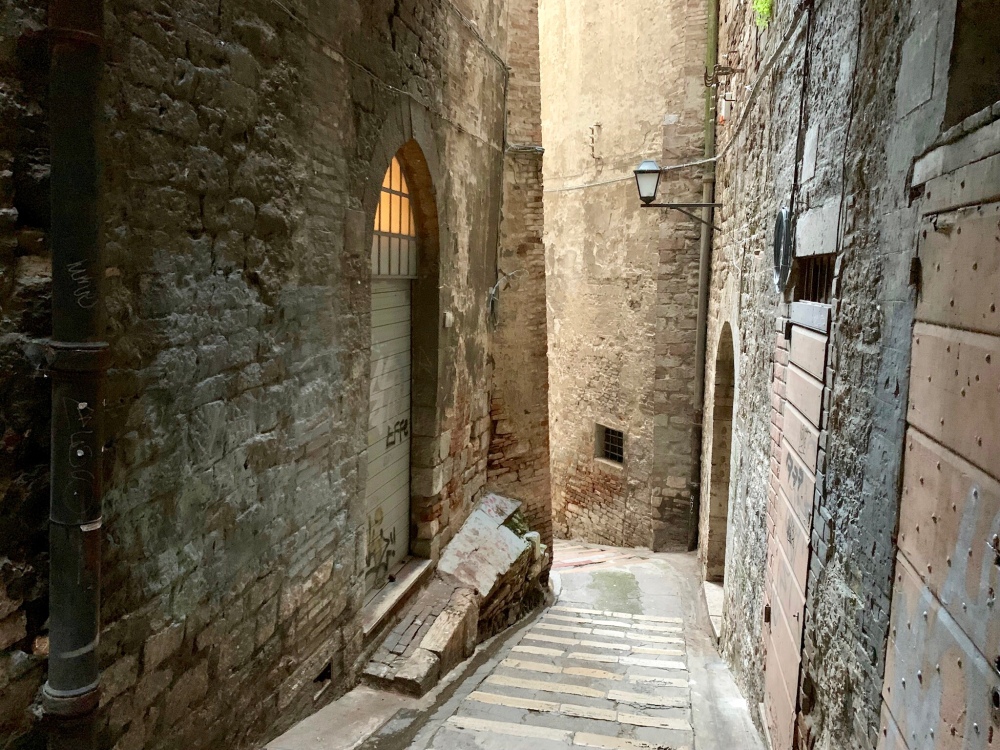 Below me to the right, streets fall away into deep shadow, tempting me with signs referencing restaurants and food to be had. I eventually followed one of these down to where dinner awaited. 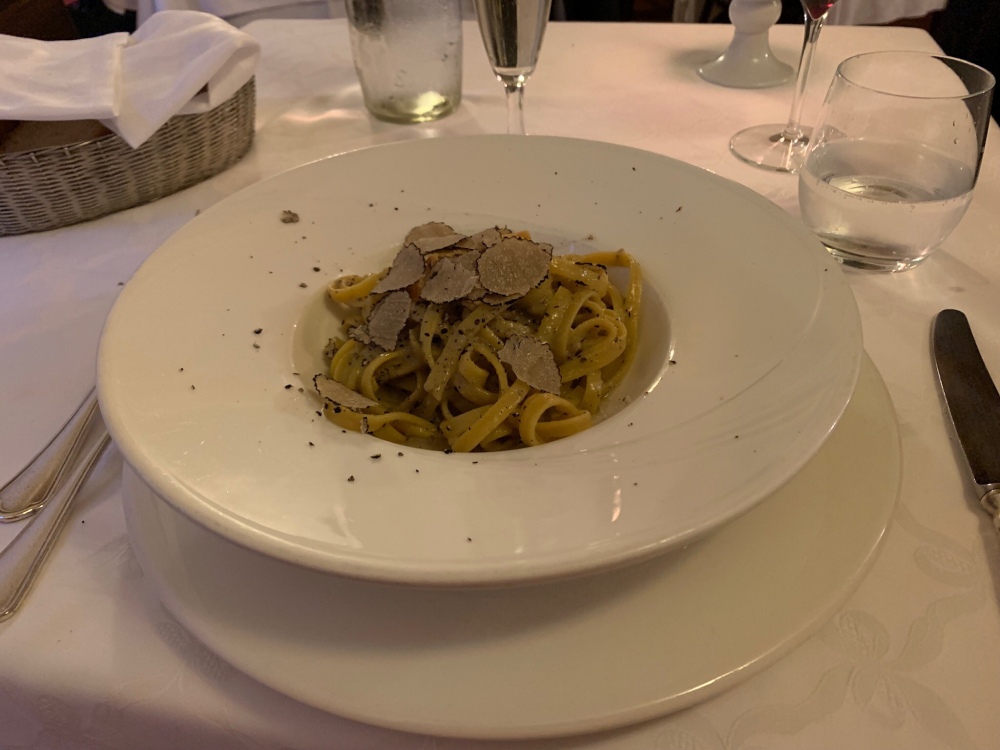 And truffles. I’ve never really understood mushrooms, for the most part. Truffles are amongst the mushroomiest of mushrooms, and this would be the place to have them. So I ordered pasta with truffles, and they were a lovely welcome to Umbria 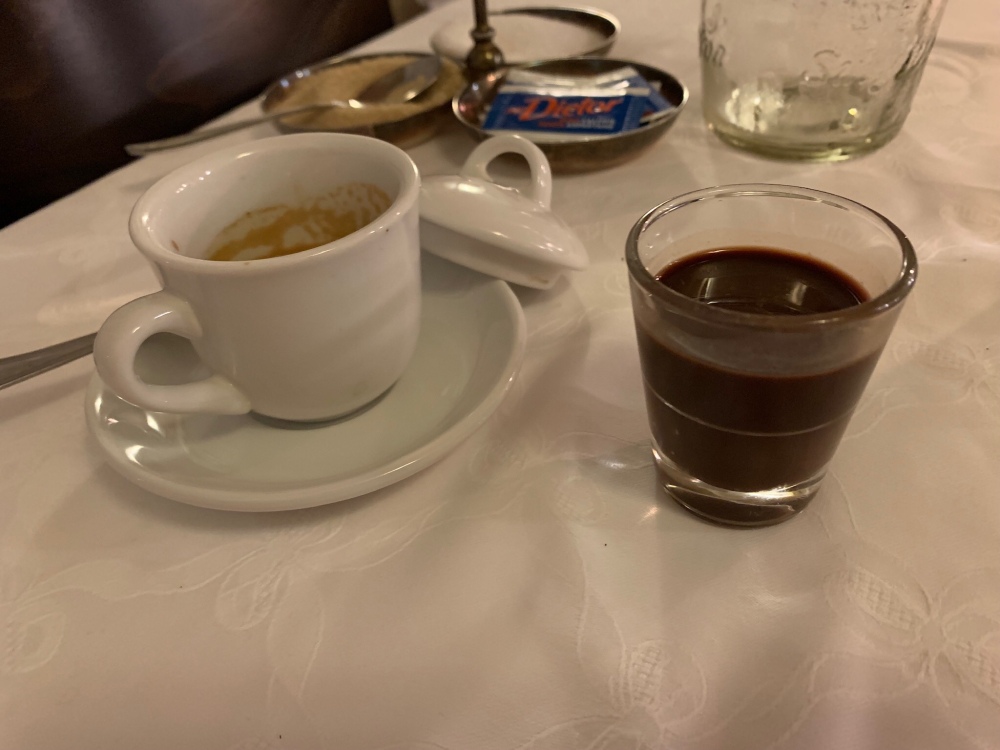 As the meal came to a close jet lag had found its home, well beyond the powers of a small cup of espresso. My eyes heavy, I paid the bill and returned at last to my cozy room and nestled in for the night.