Well, I made it to Innsbruck. I really enjoyed my time in Bolzano, and am glad I took the time to go there. In fact, I almost didn’t go because I was concerned when I planned the excursion that it wouldn’t feel Italian enough for me. As it turned out, even though I had read many places about how Austrian its sensibilities are, the city still struck me as very Italian. The citizens of Alto Adige truly do sit on the cusp of two cultures.

Did I spend enough time there? Yes, two days was certainly enough, although I have a great affection for it and could stay longer. It has its share of touristy activities, and I have done many of those, but at heart Bolzano remains an old city with a historic center where people still live and work. This ongoing vigor is just what I love about Bolzano, and exactly what the Altstadt of Salzburg seems to be lacking. Even taking into account the limited time to explore because of the hours I spent in the conference, I got no sense of such vibrancy in Salzburg’s old city. I only sensed the MainStraße Electrical Parade. I know there is much more to Mozartville than what I saw, but there isn’t anything in the other parts of the city for a tourist.

Innsbruck is another beast altogether. Frankly, it isn’t a place for tourists. Many sources I consulted said a day is enough, and for a tourist that is absolutely true. If you want to tour the surrounding area and use Innsbruck as a base, with days spent in various towns nearby, then you could certainly spend more than one day here. Or if you are traveling with a specific intent other than pure tourism, such as skiing or fishing, then Innsbruck would be an outstanding place to settle for a spell. But from the perspective of sheer tourism, there just isn’t much besides a beautiful city on the banks of the river Inn, surrounded by the Alps (not that there’s anything wrong with that).

That said, I had one of the most incredible tourist experiences ever today. When I went to visit the Hofkirche, site of the emperor Maximillian’s tomb (no, he’s not actually buried there), I stepped into the most Disneyesque, E-ticket, display so far. First I entered a room filled with pictures of old Max. The door closed, music played, and a disembodied voice started telling the story of his life. From they way the presented it, he pretty much invented the wheel, the written word, and the printing press, all while discovering the New World. While this happened, the spotlight moved from picture to picture of him. It reminded me of The Haunted Mansion. Then another door opened, and I was ushered into another room, where ships circled the globe and the story continued. Finally, in the last room, I was surrounded by figures in winding sheets, while the story of his tomb was told.

I almost feel bad. It wasn’t supposed to be funny, but in reality it was so kitschy that I couldn’t keep from grinning like an idiot. It was brilliant. Astonishingly astoundingly brilliant!

Ok, on to food! For lunch today I went to Stiftskeller, which is basically another beer hall, this time eating in the courtyard. I started with whatever the house beer was, and it was decent, albeit a little light for my taste. Then I ordered lunch, which was 3 types of sausage with a pretzel and mustard. What did I think of them? Well, the hot dog was good. For a hot dog. The spicy hot dog was better, and my favorite of the three. The third was the white-wurst, made of veal and pork. It tasted ok, but this is one of those times when you eat with your eyes, and I desperately wanted something other than plain white sausage. 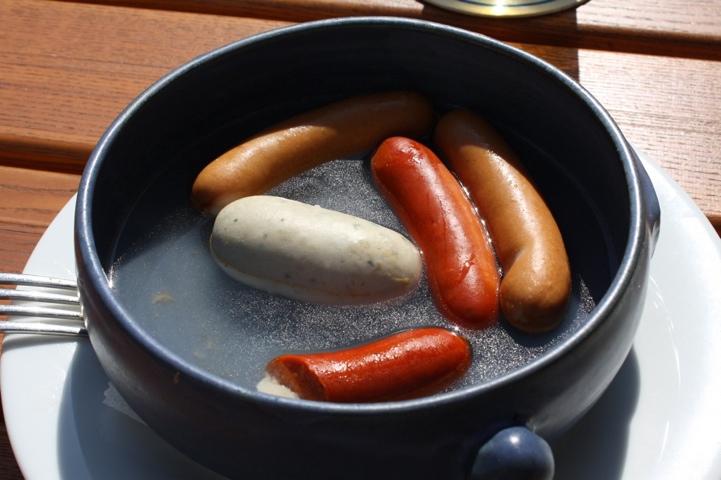 While I finished the pretzel, I ordered another beer. I had a chance to look at the menu, and lots of beers were described as “hell,” whatever that means. 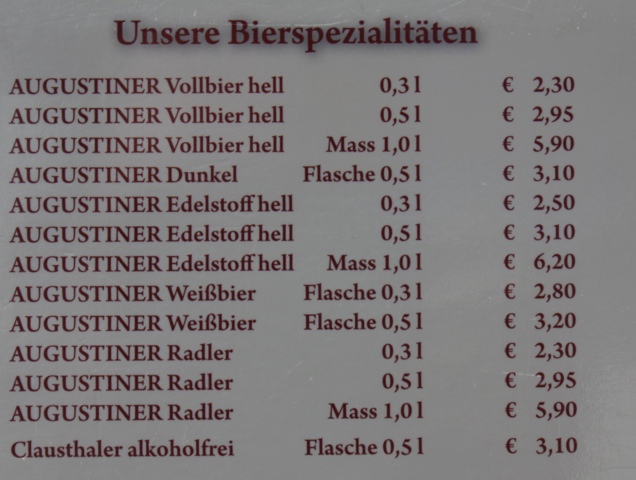 My first glass had been Vollbier hell. This time I went with the Edelstoff hell. This was really much better. Again, I don’t know much about beer so that’s all you get. Good and better. Sorry to disappoint.

Dinner found me at Ottoburg, which has been around since 1745. They feature local and international fare, according to the good people at Frommers. When I sat down the waitress brought me bread and 2 spreads. The first was herb cheese. Boursin, or something close. Meh. The other, however, was pork fat with speck and onions. This was fantastic. I can’t begin to describe how good it was. It was like spreadable bacon.

For those who think that spreading fat on bread is gross, I would suggest they think about butter and margarine. Both are concentrated spreadable fats, just with different sources. And usually with less flavor than this heavenly concoction.

For the appetizer I had consommé with sliced pancake again. I liked it better this time. The consommé seemed to have more flavor, although it may have just been saltier. The texture of the pancake was definitely better today. It was less rubbery, and absorbed the flavor of the broth better.

For my main course I had deer stew in a pan with sliced dumplings, cabbage, and lingonberries (the English menu was wrong, it said cranberries – definitely not cran). The first thing I tasted was the dumpling. I was enthralled. They had sliced the dumpling and then roasted it. This was genius, and the final product was not nearly so heavy as I had expected. Then came the deer, which was tender, and juicy, and …. salty.

This is interesting, because I like salt. I tend to oversalt, and I have to be careful when cooking for friends because of this tendency. So if I’m noticing salt, there’s a real problem. The salt in the deer and cabbage was overpowering, and this disappointed me because the underlying flavors were so so good, but masked by the salt I just couldn’t enjoy them. Sad.

For dessert I again tried the strudel. Maybe I’m just not a strudel person. The texture of the crust was rubbery, so I had to fight to cut it. It was nothing to write home about (and yet, here I am writing about it). 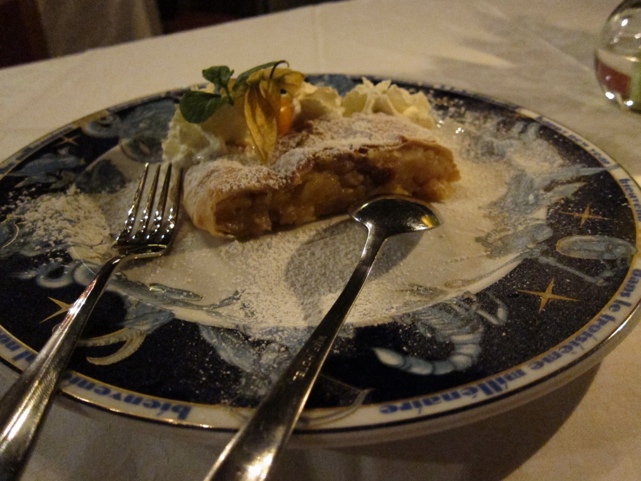 Strudel and I weren’t meant for each other, it would seem.

1. I was much more harsh when discussing Salzburg than was warranted. My memories are now much more pleasant than this post would imply. Just way too much snark.

2. I now barely remember that museum, but wonder if I would have even mentioned it today.

3. The pork fat was delicious. I’ve made schmaltz since, and it remains divine.

6. I’m a bit harsh on this meal, but that venison really was salty.

7. Food is clearly still the focus of the blog. The travel is almost a distraction.

8. I’m still not a big fan of strudel. I don’t dislike it – I’m just indifferent.