Vienna is huge. Quite frankly, it’s massive. I just keep walking and walking, finding new unexpected sights around every corner. I get lost and beauty is found. All this, and I’ve barely stepped foot outside the old city (but there is plenty to be seen beyond the inner ring.

This morning I went to the Hofburg Palace. 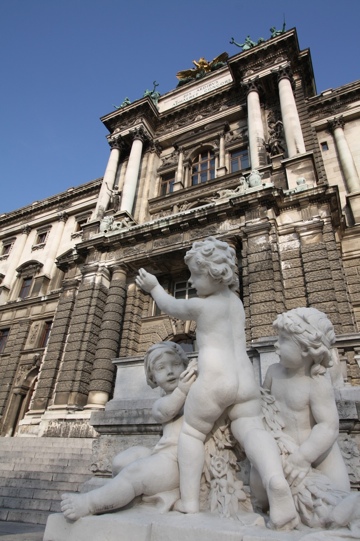 I’d started there yesterday afternoon, where I had explored the Albertina art museum. Unfortunately, part of the museum was closed, but I was thrilled to see the Blaue Reiter display. I hadn’t hoped to see Kandinsky and Marc and this was a real treat. Followed by the Impressionists it was a good afternoon.

First thing this morning I walked through the Burggarten where the Viennese, like the Salzburgunders, pay homage to Mozart.

The grounds are serene, especially early in the day when only a few of us were present.

The Church of the Augustinians is lovely. I really like the gothic structures on the ceiling, but if one looks at the depictions of human faces in other gothic structures you realize just how far the artists of that era still had to go. Thankfully the Italians decided to hold the Renaissance and restore the beauty to art (but that’s another story)

I went to see the Imperial silver, which was pleasant. I realized, however, that I don’t have a duck press, and may have to consider remedying that. I wonder what one does with a duck press.

I also went to see the imperial apartments, and an exhibit on Empress Elisabeth. She needed prozac badly. Or maybe ECT.

I wanted to see the arms and armor collection, which was in another museum. Entrance to the museum included the Ephesus Museum and the museum of musical instruments. I wasn’t especially excited about these two, but thought it was worth taking a look.

The Ephesus Museum is also known as the Museum of Austrian Plunder. Sadly, some works are incomplete, but the good news is their complementary fragments are located in the Museum of British Plunder. If we could ever get the two together, we might be able to restore some incredible ancient art. Personal commentary: there is something just wrong about being in Vienna and looking at Turkish artifacts. I’m sure the Turks would agree with me. (on the other hand, there is the victor/spoils argument) Oh well…

From there I stopped in the museum of musical instruments. I fully intended to be underwhelmed. I expected to look at instrument after instrument thinking “yup, never seen that before …. Wish I could hear it.” As it turns out we had use of a free audio guide, and for many instruments we could in fact hear recordings of them playing music. It was enchanting, walking through the old palace, center of so much elegance, and hearing the music of the era. This was singular moment, when time splits open and you are whisked away to another age. There is a mystic nature to music that is highly evocative of certain times and places for me, and this was such an instance. I could suddenly envision Vienna at its peak, musicians experimenting with new instruments, forms, and sounds, throwing innumerable sonorous ideas at the wall hoping one would stick. The music restored, ever so briefly, life to the palace, and the result was overwhelming.

The final museum in the triumvirate was the arms and armor collection. It was really a great deal of fun to see, but disappointing in the wake of the musical experience. I kept thinking that it would have been more interesting if they had sounds of the weapons in use. Maybe I’ll suggest that to somebody.