So how did I spend my afternoon? Well it started with me collapsing, exhausted, in front of the Karlskirche, which has a 236 foot high dome. 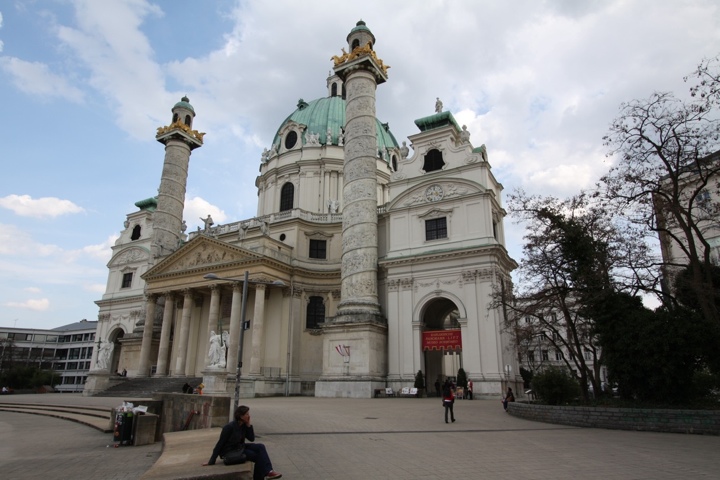 Once my feet had recovered some circulation, I decided to explore the church. I paid the €6 admission and entered the sanctuary, which was, of course, lovely. On some level it bothers me when churches charge admission, although I certainly understand the difference between entering as a worshipper vs entering as a tourist. In any case, only after entering did I realize that the admission cost included an elevator ride.

The elevator …. Well it took me up to the base of the dome, where I was then able to climb scaffolding (again, I can’t make this stuff up) to the top of the dome. The whole time I’m making this climb to precarious heights, the scaffolding sways back and forth in response to the movement of the elevator. A normal person would say, “this seems unsafe, I should turn around.” I, on the other hand, clambered eagerly upward, the fragile tower swaying ever more violently. I had visions of the newspaper presenting headlines “Stupid American Dies in Karlsckirche. Austrians Too Smart to Climb Deathtrap.” And at the top, I found dirty windows, and a mesh of steel through which I could vaguely make out the Viennese skyline. 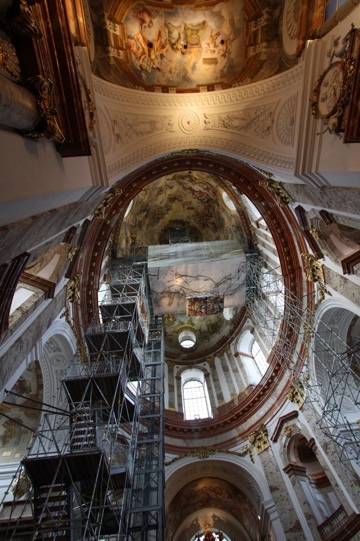 The trip down was no less traumatizing. I spent the whole trip clutching the rail and wondering, somewhat angrily, “what idiot thought this was a good idea?!?!”

An unrelated observation: I’ve noticed that the museums here divide up the art you really want to see, so nobody has more than one or two significant pieces. And some of them only show really good copies, for security purposes. It drives me crazy. For example, I had to walk through a whole museum of pictures that all start to look the same (or portraits of unknown merchants – bleh) just to see Hieronymous Bosch (tangential note, the iPad automatically corrected that spelling to “hoer my pus”).

Solution: I’d like to open the Museum of Important Copies. Open a single museum in Vienna with copies of the most important work from around town. Make sure everybody knows it’s a copy, so they can’t complain. Customers can say “why yes, I saw Durer’s praying hands in Vienna and loved it.” They get basically the same experience and save time and money in the process, while we make a tidy profit (as it turns out, the original of that particular work is not on public display, but there is no sign next to the picture saying “we bought this at the museum store, and so can you”).

Anyway … On to dinner. I went to a restaurant recommended by Frommers again. They had no English menu, and I took this as a good sign, although it meant the poor waiter had to translate everything for me. First came the beer. It was an Austrian pilsner. It was decent. The waiter asked if I wanted big or small, and I indicated a half-liter, since that seems to be the standard size. For future reference, that’s big. 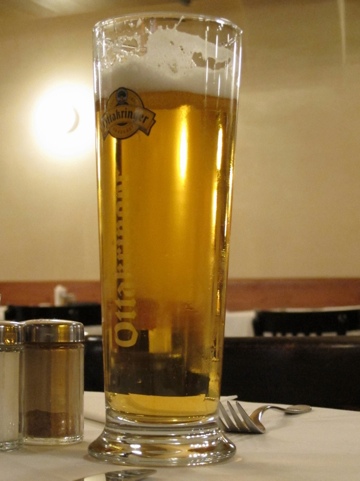 First course was cream of carrot soup. I’m not a huge fan of carrots, but this was really tasty. The carrot was present, but not overpowering. It was light and creamy. M and J recently made a similar soup for TC. I would have to do a side-by-side comparison, but think theirs was probably better.

After this I had duck breast with cabbage and dumpling. The duck was ok, but a bit overcooked. It was somewhere between medium and medium well. The one piece that was medium is seen in the picture, the rest was cooked more. You just can’t do that to duck … It will get tough if you overcook it, which is exactly what happened to this poor beast. Medium rare, to medium at most. If you’re wondering about salmonella, somebody on TV once said it isn’t an issue with duck. If it was on TV it must be true. 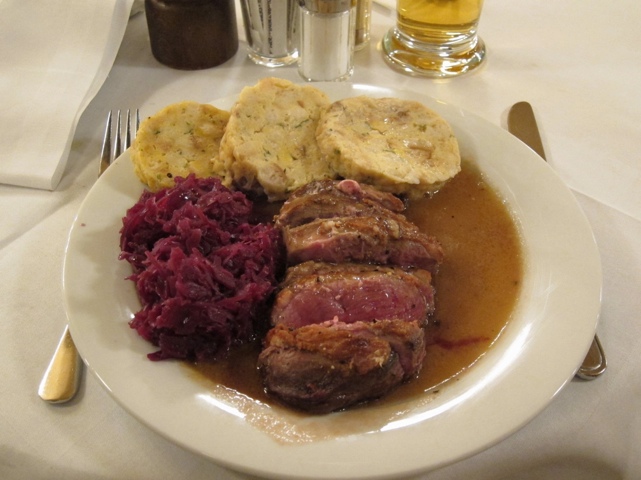 The cabbage was standard Austrian fare. The dumpling was quite good, however. They had sliced it first, which was a nicer presentation. It also seemed lighter than usual, which may be perception, an illusion created by the slicing, or it may have truly been less dense. Either way, it had a nice chicken flavor and I liked it.

Finally, dessert was a chocolate mousse torte. More of a milk chocolate mousse rather than dark, and the base layer of cake was probably made with cocoa. It was ok. I had some white wine with it that the waiter said was sweet. It was a muscat, if I interpreted the menu correctly. The thing with muscat, is that wines made with that grape are so very fruity that you can think they’re sweet when they’re not. I suspect that was the case with this wine, and it was probably at most a semi dry, and not truly a dessert wine. As such, it was a disastrous combination (but would have been even worse if the chocolate had been more intense).

I blame myself for dessert … I had a bad feeling about that wine choice. I often trust the waitstaff for food and wine recommendations, but this seemed wrong, and I should have trusted my instincts. Poor Dobby.

So I’m still trying to decide whether tonight was really that disappointing, or just anticlimactic. It would have been tough to beat last nights meal, but I could do better than this. Easily. In fact, perhaps I will, for some TC night in the future, as long as people agree to let me cook duck.