Still without any rumor of luggage, I got up and dressed in my new clothes and had a revelation. Although Steve Jobs was famous for his reality distortion field, designers and clothing vendors have a similarly effective field. Basically, you look through the store and reorient your expectations. You step into the dressing room, try the clothes on and think, “hey, that’s not bad!”

The next day, the effect has worn off and you come down from the squishy bender only to realize that “wow, that’s really not bad – that’s awful!”

After a last morning of conference I checked out of my hotel and met S, who now has her luggage, for lunch.

A moment here while I comment on the hotel. I stayed at the Room-Mate Isabella, formerly the Albergotto. Over many visits to Florence I have never before found a hotel to which I had any desire to return. People have asked me where to stay, and I have shrugged my shoulders and said, “good luck. I don’t know. Florence hotels are overpriced and undergood.” I can now recommend this hotel. It was clean, updated, bug-free (important!), central, and the staff was courteous. Now that they’ve changed their name I don’t know what will happen to rates, but I’ll be sure to check them out in the future.

Ok – back to lunch. We tried to go to a recommended sandwich shop in Mercato Centrale, but the line was crazy. Another restaurant also had a grotesque line, so we settled for a third restaurant near the market. I had tagliatelle with cacio (cheese) pepe (pepper) and pancetta (pancetta). It was tasty, but I would have liked more pepper.

We lingered over lunch, chatting idly. I then guided S (and her husband) to the Uffizzi. And with that my time in Florence drew to its final close as I hopped the train to Bologna.

In Bologna I started my time trapped in the vortex of luggage (I had to notify the airport of my location should it ever arrive). This took longer than it should, but I was eventually out and shopping the Bolognese markets, scouting out cheese and other necessities for when I start hoarding such things.

I had a few recommendations for dinner. The first was uninspiring when I looked at the menu, so instead I went to a second choice. This was highly recommended by a friend, but my current disheveled appearance left me reluctant. Still, the staff at Battibecco were utterly gracious and the meal was flawless. 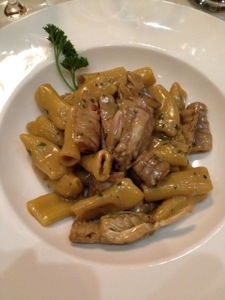 One confession here: I don’t think of seafood when I think of Bologna, but that is the specialty at this restaurant, and I’m very happy with my choices. I started with roasted sea scallops, with lardo and crushed pistachios. Those who know me know I rarely have eaten scallops, but because D spoke of them so highly, I had to try these. They were sublime. The flavor of the scallop was so gentle and subtle, the lardo was a perfect match (I have heard of bacon being used in a similar manner, but I think it would overpower the dish).

Next I had homemade rigatoni with cannocchie. This was at the recommendation of the waiter. I have not previously been familiar with cannocchie, and the waiter said, “like a shrimp, but brown.” I wondered if they were perhaps crayfish? Nope. They are much more unusual. Yup theyre ugly and almost primeval. And tasty – much meatier flavor than shrimp (which I don’t particularly like). This dish continues my ongoing education about seafood and pasta. It was superb.

A glass of grappa and I was done for the evening. What a meal! Thank you, D, for the recommendation. 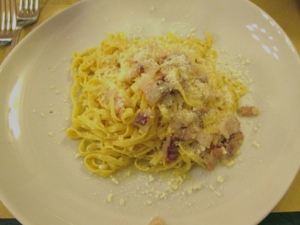