I get on the plane it is an A330 widebody (twin-aisle) jet plane and I have a window seat. As I stow my baggage I feel as though I am hogging the overhead bin, but think “there aren’t many people in the cabin. The people in the middle section can use the bins above them.” I then notice something – the middle section has no overhead bins. This makes for a much roomier cabin, but runs the risk of running short on overhead storage. Still, as not all passengers travel with big bags it is probably a non-issue.

After taking our seats they bring prosecco. Lovely.

We are given a Bulgari amenity kit. Nice. I’ll try the aftershave, since I am now shaving again and am actually caring about it much more than I ever did in the past.

Once aloft I look through the entertainment selections. I would say that Alitalia does not have as wide a selection as some other airlines on which I have flown. I go with Iron Man 3. Eventually I slept through the end so have no idea how it all gets sorted out. I’m guessing that Iron Man wins. Just a hunch.

When dinner comes they first set my table. Up until this point I was speaking entirely Italian, which wasn’t difficult with 1 or 2 word answers. But suddenly there are real questions to be answered and my understanding is quite rusty. I sheepishly switch to English.

There are three antipasti. First is fish carpaccio with cucumber, lemon gelatin, and capers. This is light, tasty, and refreshing. The gelatin isn’t jell-o by a long shot – it is delicate. The capers are briny blasts of flavor. Next dish is prosciutto with orange and celery. What is there to say about prosciutto. It’s delicious and pairs perfectly with the orange. In fact I much prefer this pairing to melon, which I’ve never really loved. The celery is the newcomer on the plate. It is crispy and salty (I feel like that’s always the case though) and holds its own nicely.

Lastly they bring an escarole and olive pie. At least thats what the menu says it is. I’m not convinced this is the right description. There are raisins and lots of pine nuts and olives. It reminds me of capunatina in a pie. It is outstanding.

Next course is pasta. They have two choices. I pick both. Service is amazing – trays of pasta are brought down the aisle and are served tableside. One flaw is apparent in these dishes – they are not al dente. Beyond that I have absolutely no complaints. The fusili with San Marzano tomatoes and Basil is delish. Balanced with sweetness and acidity – much better than many tomato sauces I’ve had on the ground. Next is pasta with salt cod (baccalà) green olives and pecorino. I have so rarely enjoyed seafood pasta outside of Italy that I forget how good it can be. The cod and olives are both salty and balance nicely with the creaminess of the sauce. This dish is a star, and they’ve included the recipe in the menu. Yay!

Options for the secondo are veal or fish, and this time I go for the veal medallions with potatoes duchesse. They are not overwhelmingly great but very very good. The contorni (sides) of potatoes, spinach, and eggplant are less successful. The eggplant is my favorite of the three.

Dessert is a lemon ricotta torte with a glass of passito. The torte is delicious. The lemon is delicate and the ricotta is light and dry.

After dessert I decline espresso and sleep.

A few hours later I wake somewhere over the North Atlantic, approaching Ireland. I go back to sleep and permanently waken an hour later over France. There is an hour left in the flight and they are bringing up the lights in the cabin.

Breakfast is fruit with pastry (chocolate filled) and yogurt. 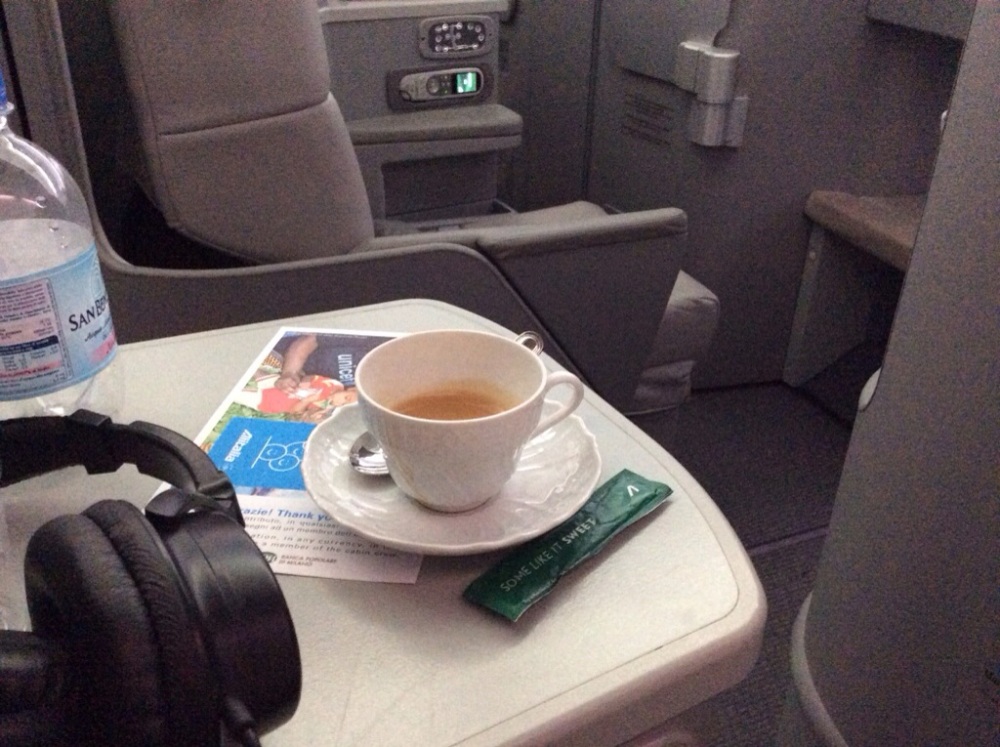 And we will be landing soon. See you in Roma!