This is it, my friends, the last day of this voyage, and we started with no set agenda or schedule, so slept in a touch longer before breaking our nightly fast.

When our morning meal was done we returned to our room where, out the window, the world had become saturated. I haven’t spoken much of the weather this trip, but it has been almost universally cloudy, the likes of which are seen only in Portland. Yesterday was the only day with any real sun to speak of, and while the temperature was chilly in Bologna, it hadn’t rained.

Now the burgeoning clouds were unburdening themselves, and the footpaths in front of us were grown wet and unreadable.

Had this been a mere sprinkling of rain, we would perhaps have braved the streets and alleys, but the downfall was vigorous and threatened to drench us as well.

So instead D and I stayed in and perused the product offerings on Italian infomercials. There was a kitchen gadget that promised to cook everything one could imagine. I think I’ve seen something similar on TV at home. 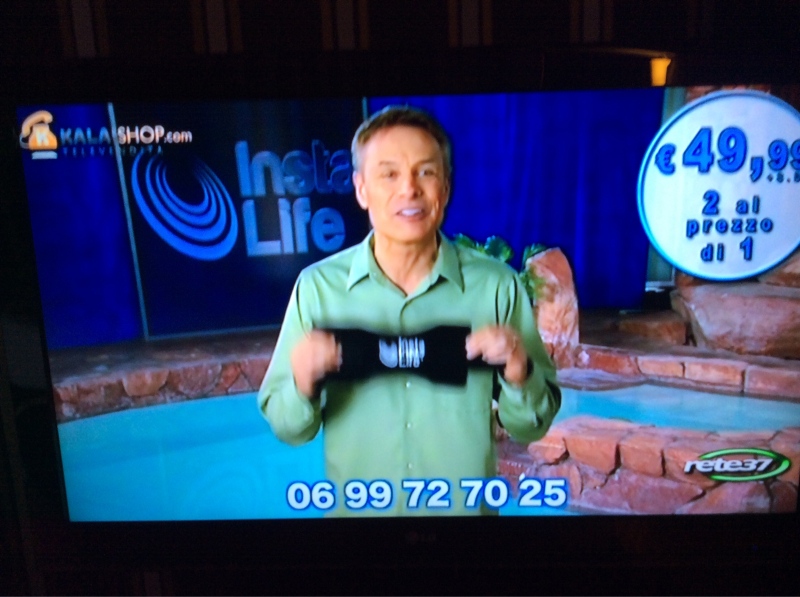 I change the channel, and find this. This is a more benign product. The Insta Life. Simply wrap one around your right calf and it seems to fix a variety of musculoskeletal problems in every part of your body. Everybody who wears one smiles the grin of the happy and healthy.

A few channels away, this gentleman is clearly in excruciating pain. I immediately suggested that he could use the Insta Life, but instead he is a candidate for Royal Posture, and I don’t understand how that determination has been made. The price of the Royal Posture is the same as the Insta Life, 2 for 49 Euros, but it is much more involved, being a back brace of sorts that also wraps around your lower torso.

As I look more closely, I think the Royal Posture also doubles as a maternity belt, yet they don’t suggest it for pregnant women. Hmm.

Looking up from the infomercials, the rain has finally stopped, and with its abatement has ended our sequestration. We step into the streets of Florence, mostly empty still, and dodge puddles as we work our way across town. 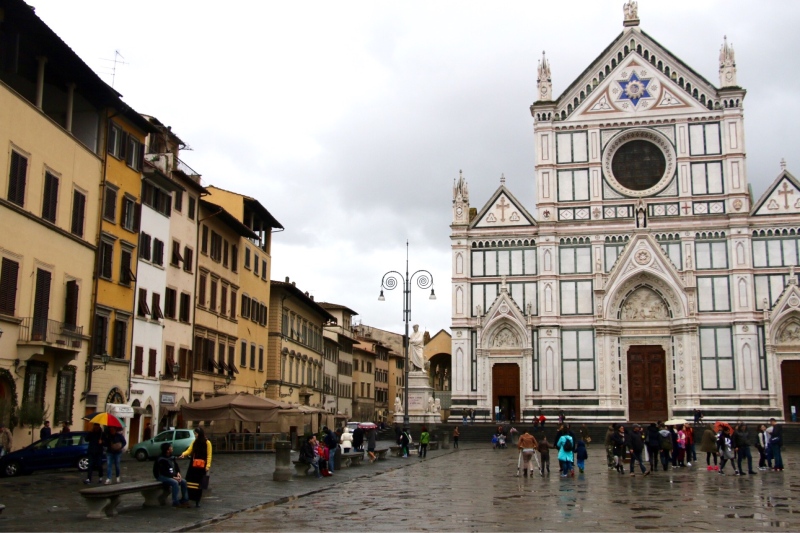 Within the majestic interior are a number of famous tombs, and we come to honor these great men. 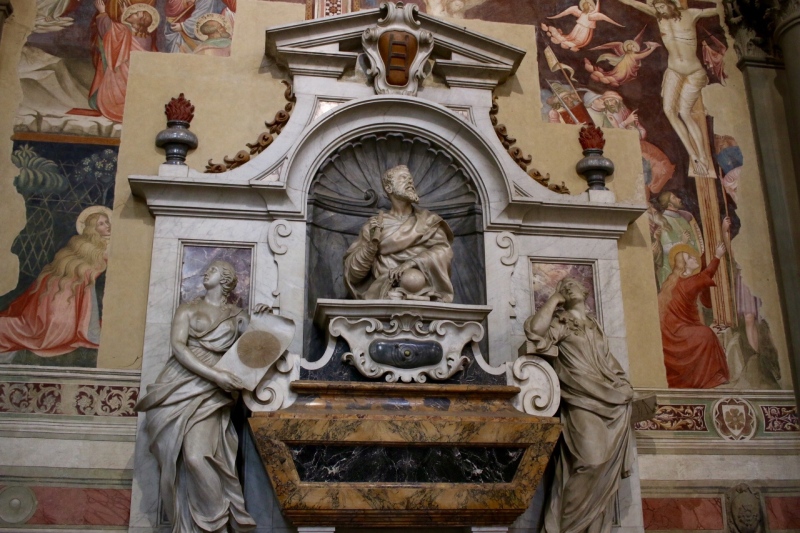 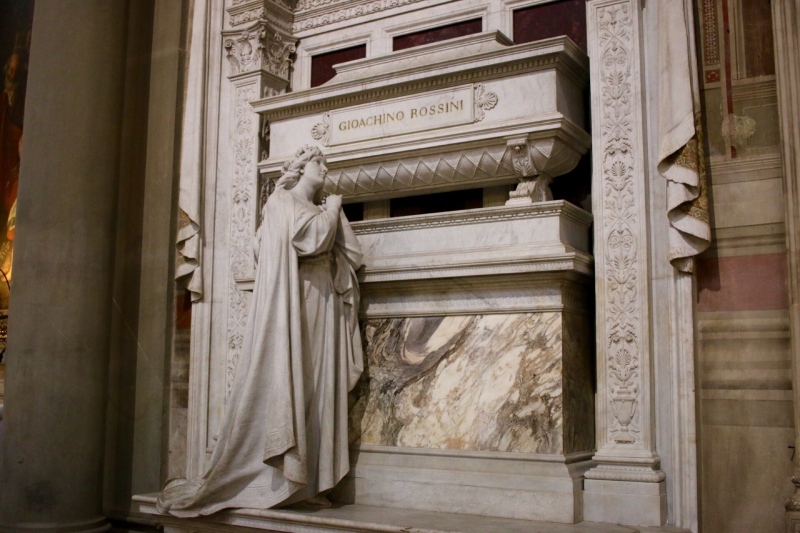 These are some of the famous ones who rest in this cathedral, yet others are interred here as well, some under elaborate relief markers of varying depth inlaid in the floor, most of which are quite worn. We note that some are cordoned off, whereas others aren’t, and the logic behind the distinction is unclear, as it isn’t obviously related to the depth or quality of the relief.

We linger a bit in the sacred spaces of the complex here before heading back into the streets and finding lunch at a nearby trattoria.

Food in Florence. *sigh* I’m just going to say it – it’s a crap shoot. I haven’t had luck asking hotels, because they mostly just recommend the place down the street. And Trip Advisor and Yelp are profoundly flawed. When choosing a restaurant I personally want authentic local cuisine, but the restaurants here incorporate food from all over the Italian Peninsula (which I guess can be considered “local” by some measure) and not just Tuscan specialties. Further, because the reviews on the various websites are compilations of scores from visitors who often don’t know any nuance other than “Italian,” a score of 4.5 becomes meaningless.

Another thing that I think about is this: Americans have been sold on the products of the “Tuscan Kitchen,” including olive oil, bruschetta, parmigiano reggiano (not actually Tuscan) and the like. We have incorporated many of them into our diets, and the end result is that perhaps it becomes more difficult for me to interpret what I’m eating, as it all begins to seem more average.

Maybe this is all OK. The restaurants are in the business of making travelers happy and they’re clearly doing it well. There was a time when I was very happy with this arrangement, but I’ve grown more high-maintenance over time. I have to admit that, even though I don’t want bucatini all’amatriciana in Florence, that doesn’t mean somebody else doesn’t. Perhaps I’m taking this far too seriously. Then again, perhaps I’m spoiled by Bologna, where tourists are less common and the locals are openly proud of their cuisine, widely regarded as the best in Italy, and will pointedly direct diners to the Bolognese specialties.

Not withstanding my whining and perseveration, the trattoria we found for lunch was great, and certainly much better than our last two dinners (which were OK and downright decent). I had pappardelle made with wild boar, and would happily send friends back there for a meal.

As we finished our lunch, shadows were lengthening, so we headed back across town. Every place we tried to stop seemed to be closed for the afternoon, and the rain was returning. The combination lead us to eventually give up and return to the hotel to pack.

Our final meal was at a restaurant well known to me: La Giostra. The food and service here are outstanding. We had the Florentine steak, which is just a beast.

On the way back to the hotel, we made one last stop, this time at the Bargello, a museum which had been closed for the afternoon but was open in the evening. This museum is best known for its statuary. As we entered we were repeatedly warned that it was closing in 40 minutes, so would have to hurry.

And hurry we did, seeing a few remarkable pieces, such as numerous works by Donatello, including this David, on the upper floor.

And this David, also by Donatello.

When we arrived at the ground floor after 25 minutes, they tried to shoo us out, stating that the museum was closing in 15 minutes. I pointed out that it was closing in 15 minutes, and wasn’t actually closed, so they reluctantly let us continue. We drifted breezily through the lower floor then, all while the museum workers made loud noises around us reminding us of their presence and the inconvenience we were creating.

It was admittedly a cursory visit, but for the two of us, who have limits on how much art we can process, it was just fine.

It was now 11 pm, and the last vestiges of our time here had slipped finally away. Navigating the disjointed and dimly lit Florentine streets, the lightest of rains was beginning to fall when our hotel came at last into view again. And our last day in Italy was complete. Tomorrow morning our planes will takes us back home, where Thanksgiving week awaits.