I shouldn’t be here right now.

Really, I shouldn’t. If things had gone as planned, right now I would be wrapping up a trip to Paris, probably having a delicious dinner somewhere, preparing for a flight home. But the school schedule intervened, so my colleagues asked me to move my vacation in order to accommodate my partners with children. Happily enough for all, I was able to move the vacation back a week, but at the cost of my first-ever visit to France.

Instead, I sit here in the lounge at JFK on my way to Turkey, trying to make sense of this sign by the Hershey’s bottle.

Yes, I’m going to Turkey, where there was just a bombing a few days ago. It wasn’t anywhere near where I’m going, but still, it gives one pause.

This is a trip that began last night, with a flight to New York. And it began in an extraordinary fashion! You see, while waiting at the airport in Detroit, I had the remarkable fortune of meeting up with an old friend from school, who is now running many of the restaurants in the airport. B and I have been trying to coordinate our schedules for a while and I’m just ecstatic that it worked out. There is something about finally meeting up with an old schoolyard buddy. You start with catching up, and years miraculously melt away. Roads that have split over decades suddenly merge back together, even if only for a while.

And my soul smiled. A lot.

Also, he brought me a delicious pizza that was coveted by many a fellow passenger. If you happen to be passing through the terminal at DTW, I recommend grabbing a pie. You won’t regret it. (But be careful, as it is difficult to hold a pizza with one hand and photograph it with the other.)

My flight took me to JFK, and I overnighted in my place in the city. I met D for a canollo accompanied by a butterscotch hot white chocolate at Rocco’s in the West Village. D usually comes to Detroit for the auto show, but the weather this year scrubbed those plans, so this was a long overdue opportunity to spend time together.

Then this morning, I met up with another friend who lives in New York, and we passed a few hours taking in the energy of the City, waking anew as winter breaks toward spring. We sat in the dog park surrounded by city dogs, talking for a while, and then walked some. Finally the clock was winding down to the next leg and he sent me on my way with a care package of peanut butter cup popcorn for the road.

I stopped briefly back at my apartment, pausing just long enough to vacuum, and I and my bags bid adieu to the doorman.

A speedy walk to Penn Station, and a cheap ticket on the Long Island Rail Road carried me to Jamaica Queens, where I caught the AirTrain to JFK, Terminal 1.

And here I am now, sitting in the lounge, enjoying a bite to eat. 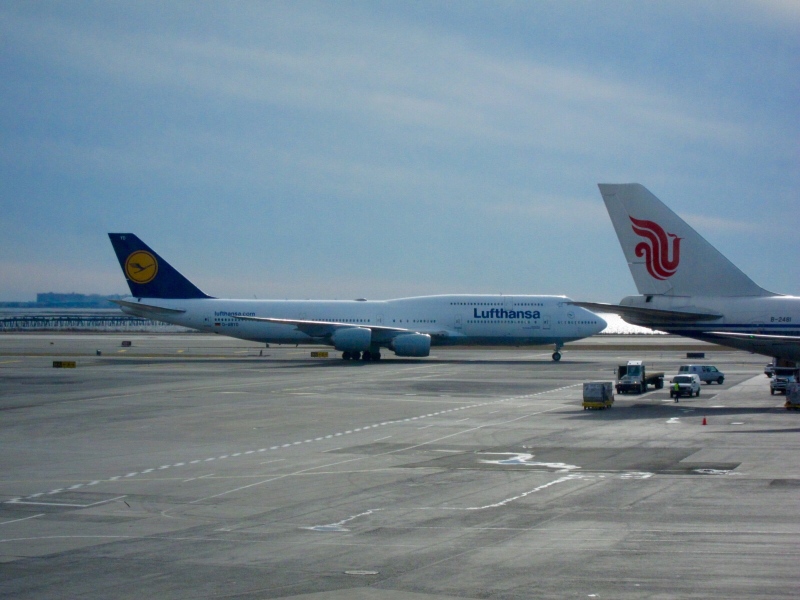 Out the window I can see that my aircraft, a 747-800 has just arrived. A long journey, with long layovers, lies before me now. The first leg of this voyage will carry me to Frankfurt, and the next to Istanbul. Had I made my own plans, I would have likely paused there for a night or two, but the Turkish travel agent with whom I am working urged me to continue on to my next leg, as much of Istanbul is closed at the start of the week. Knowing my penchace for finding closed museums, I accepted this as sage advice.

In the end one more, final, leg will take me to Izmir, from which I will find the long end of my voyage on the Aegean coast, in Kusadasi. This will be my home base, from which I will be visiting some of the gems of the Ancient World.

I will see you soon, my friends, with plenty of photos, and perhaps some stories as well!

2 thoughts on “The Wrong Trip”