It turns out I don’t speak Turkish. Not a word. Instead, whenever somebody does something I say danke, which makes no sense at all, because I don’t actually speak German either, and there’s a high likelihood neither of us does. The end result is I’m trying to say “thank you” in a language nobody speaks. It started because my flight over was German, so I kept saying it on the plane and in the airport in Frankfurt. Now I’m in Turkey and I still say it, and they look at me like I’m crazy.

How were the flights? They were spectacular. The first leg from JFK to Frankfurt was on a Lufthansa 747. When I boarded, I started saying “danke” to pretty much everything, and as I said, this is where it all started. Apparently I said “danke” at all the right times, too, so the flight attendant really did think I spoke German. I even ordered champagne in German, but the whole facade broke down when time came to order dinner. We both had a good laugh when I confessed to the truth.

Dinner was decent, with excessive amounts of food, then I slept for about 4 hours until first breakfast.

After a 3 hour layover in Frankfurt I was on my way to Istanbul. On this flight they served us another breakfast. 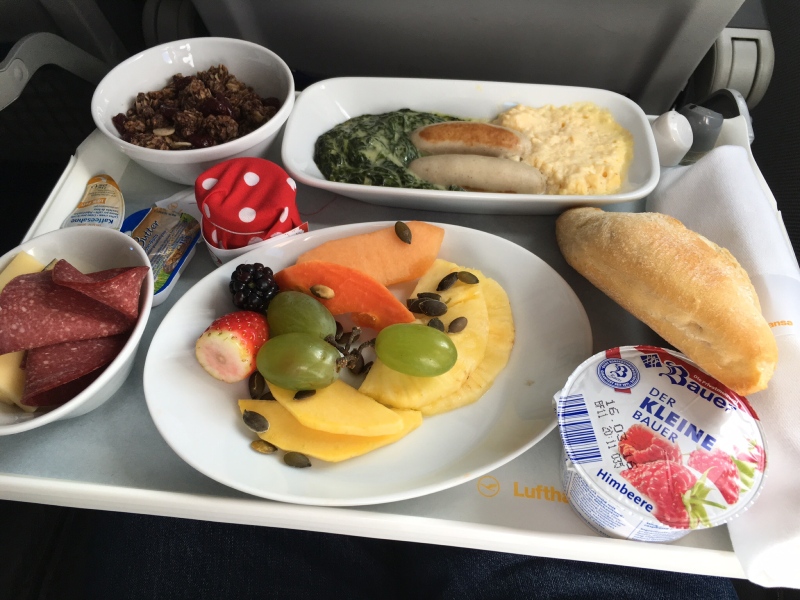 Yes! That’s it in the picture, there. And it was horrific. A crime against humanity. It looked good, but it tasted vile. See those white sausages? They are made of veal (not pork, given the destination) and somewhere a cow has lost her calf in vain. Somebody from the airline should find that cow and apologize to her in person, those sausages were so bad.

There really wasn’t much that was very good about that breakfast, so I mostly ate some of the underripe fruit and yogurt, and then slept some more. 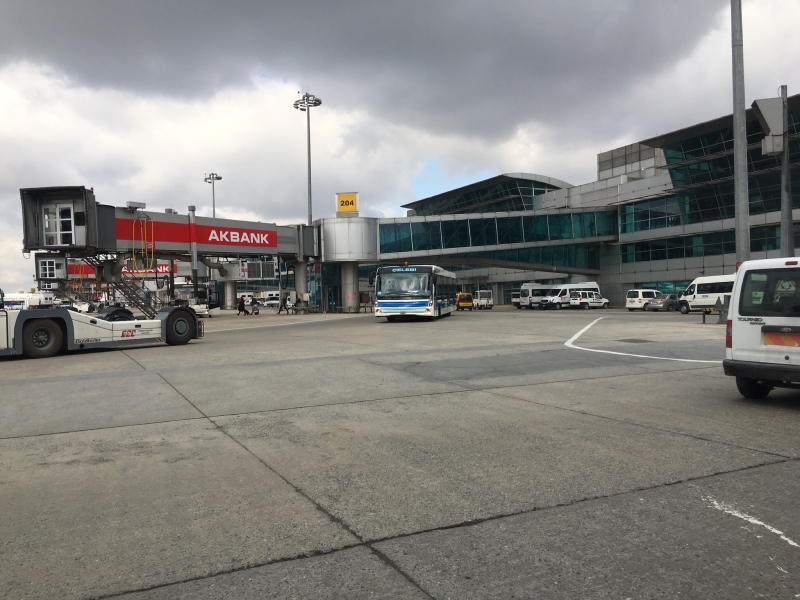 Arriving in Istanbul, we parked the plane on the apron, and took buses to the terminal. I don’t think I’ve ever seen so much automobile and bus traffic on a tarmac. It reminded me of driving in Rome. We unloaded and I joined the queue at passport control. I already had purchased a visa, so this was very quick.

With that, I was in Turkey. I checked in for my next flight to the coast and went to the lounge.

There, of course, I found food. Turkish food, in fact! My minimal experience with Turkish cuisine to date has told me that it falls somewhere between Greek and Arabic, so I expected to find flavors with which I am well-acquainted. Some of the things on that tray are a filo cheese pie and a spinach pie.

But the first thing I ate in Turkey was soup. Turkish Wedding Soup, made with lamb stock, lemon, and eggs. It reminded me of Greek Avgolemono. It was lounge food, but it managed to place me emotionally in a very good place. This is going to be a great trip!

The flight to Izmir reminded me of one of the flights in Indonesia, during which the flight attendants rushed down the aisle, rushing to get us our snack boxes before the plane landed. In this case, the eggplant salad was a winner. And the sandwich was … a turkey sandwich. The only remarkable thing about it is that I can now say I’ve eaten turkey in Turkey, somehow fulfilling a goal for this trip.

My driver Ali met me at the airport, and we were on our way. I was the only passenger sitting in a bus built for 10, which suggests to me that sometimes this place gets much busier than it is today. He seemed to speak English when he met me, but it quickly became clear that I had either exhausted his vocabulary or he couldn’t both speak English and drive at the same time. In either case, I rode in silence, taking in the gorgeous arid Turkish countryside as the mountainous shadows lengthened around us.

I checked in at the hotel well after the sun had set and there was barely a hint of light in the night sky. Barely pausing to freshen up, the moon was high in the night sky as I walked into the town. I strolled up the empty road where the sea pounded against the land, hearing the sounds of the waves and smelling the Mediterranean air.

I walked with purpose, because I had a mission. I wanted something simple and easy, so I found a recommended restaurant in town and sat down for a kebab.

In this case, it is an adana kebab. The bread was baked fresh in a wood-fired oven from which incredible aromas perfumed the air, and that’s a tzadziki sauce (I think, although that’s the Greek term, and I sure there’s a different Turkish word for it) and a red pepper tapenade on the small plate toward the top of the frame. At long last, this was an outstanding meal. It was simple, but perfect. And it was real. This was what I was waiting for.

And with that my long day of travel was at last done and I found my way back to the hotel in the quiet of the Turkish night and slept.