More conference today, so not much time in Rome. The conference is good. They are providing us with lunch, and it is one of the better conference lunches I have had. It isn’t great, but it’s decent.

Speaking of conference food, the coffee breaks are interesting. At most meetings, as the designated break time approaches, some sort of snack and drink goes out, and people help themselves. That is not what happens here. Instead the food goes out, but we are not permitted to partake until the designated time. Curiously, the time doesn’t coordinate with the conference schedule. Yesterday, for example, the break started at 9:50, but we were only allowed to circle, looking rather pathetic, until 10 am. All the while, the cookies were being conscientiously guarded by representatives of the hotel. 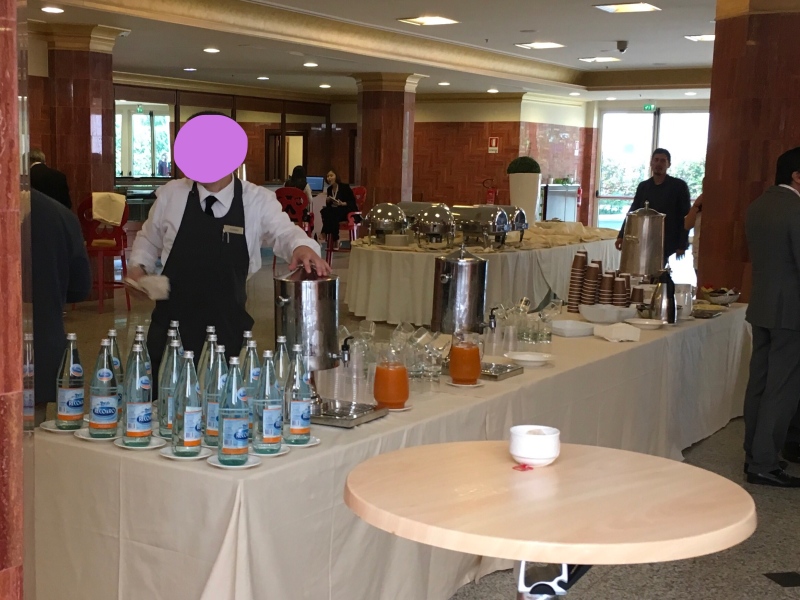 This gentleman is guarding the juice and the water. It was 2:27 and we weren’t to be permitted anything to drink until 2:30. They are serious about this: we could be dying of dehydration, and we would be turned away.

I did eventually make it to Rome. Generally, by the time I make it to town most of the landmarks have closed, and I am trying to find dinner and make it back to the train station in time for the last train back to the hotel.

Tonight I had porchetta. There was this sandwich, but I later went back and got more pork. I think the vendor thought I was crazy, but I didn’t want bread – just pork, and we can’t get this at home.

After dinner, I had gelato, which is a change for me this trip. Mostly I’ve been having gelato first and then dinner, whereas traditionally I have eaten dinner first. Frankly, this may be my new preferred workflow.

And then I sat for a time on the Piazza della Rotunda, taking in the Pantheon.