The mountains rise up around Machu Picchu like colossal green pillars of a shrine, supporting the massive, ethereal, dome of the sky above. This is hallowed ground, which we enter solemnly, humbled by the spirits of the people that labored here. In simple human terms, Machu Picchu is less than 600 years in age, but in spiritual terms, it has a longer-lasting and much more permanent place in the universe, standing along the ancient sites I have visited elsewhere. It is simply magnificent. 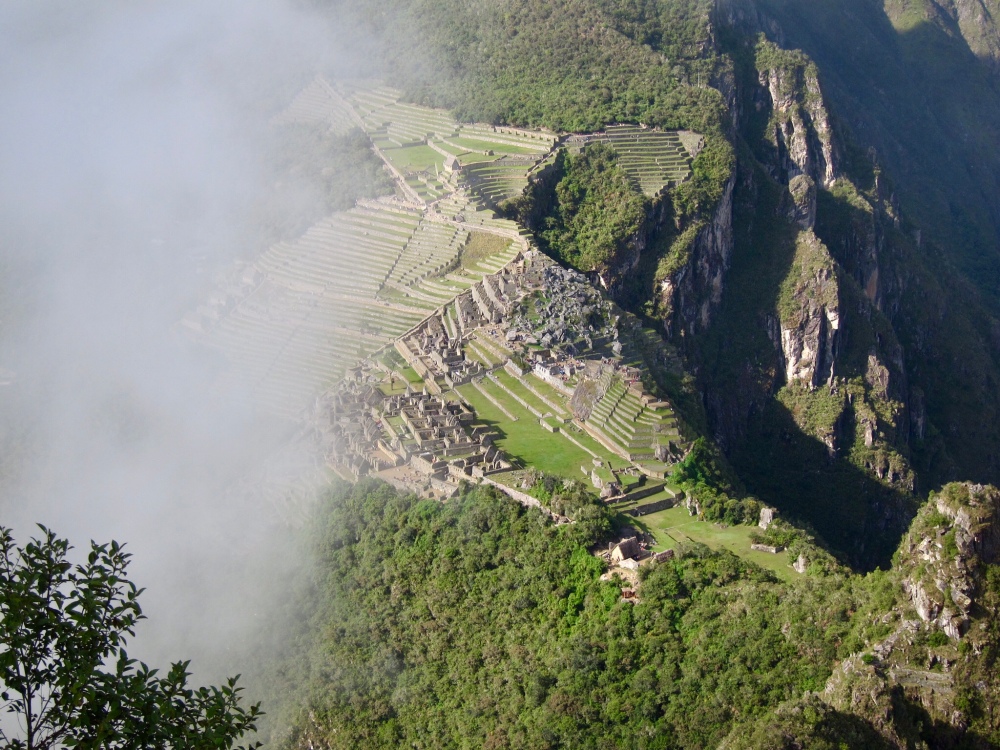 And it is mysterious. Nobody knows why the Incas left Machu Picchu.

Experts can’t even quite agree on the purpose of Machu Picchu, to be honest. Our guide told us this was a religious site, but other sources indicate this was an estate of the Incan emperor (Wikipedia indicates consensus on this, so perhaps there is agreement). Whatever the purpose, it was built in the mid-1400’s and abandoned a century later.

Our guide informed us that there are several theories as to why it was abandoned. Perhaps the Incans left because of the Spanish conquest elsewhere in the region. Or it may have been because lighting struck the Temple of the Sun. Maybe it was smallpox brought by the European invaders. Because there is no written record, we just know that suddenly the site was vacated and mostly forgotten about.

We spent last night in a very nice hotel in Machu Picchu Town, previously known as Aguas Calientes, which sits well below the historic site. We all were thrilled to take a hot shower, to start scraping off the accumulated grime from the hike, and to sleep in a real bed. We also had a nice meal (and I finally ate cuy), although frankly the food on the trail has been pretty decent.

This morning, after breakfast, we packed our bags and joined the long line of tourists waiting for a bus to take them to the site.\

Our first objective for the day was to climb Wayna Picchu, the mountain immediately next to Machu Picchu. It stands about 1200 feet above the ruins below, so we’ve definitely made higher climbs, but this one doesn’t have much of a horizontal component, so it may be more intense. A couple members of the group decided not to go, having had enough of treacherous stairs, and I honestly can’t blame them. 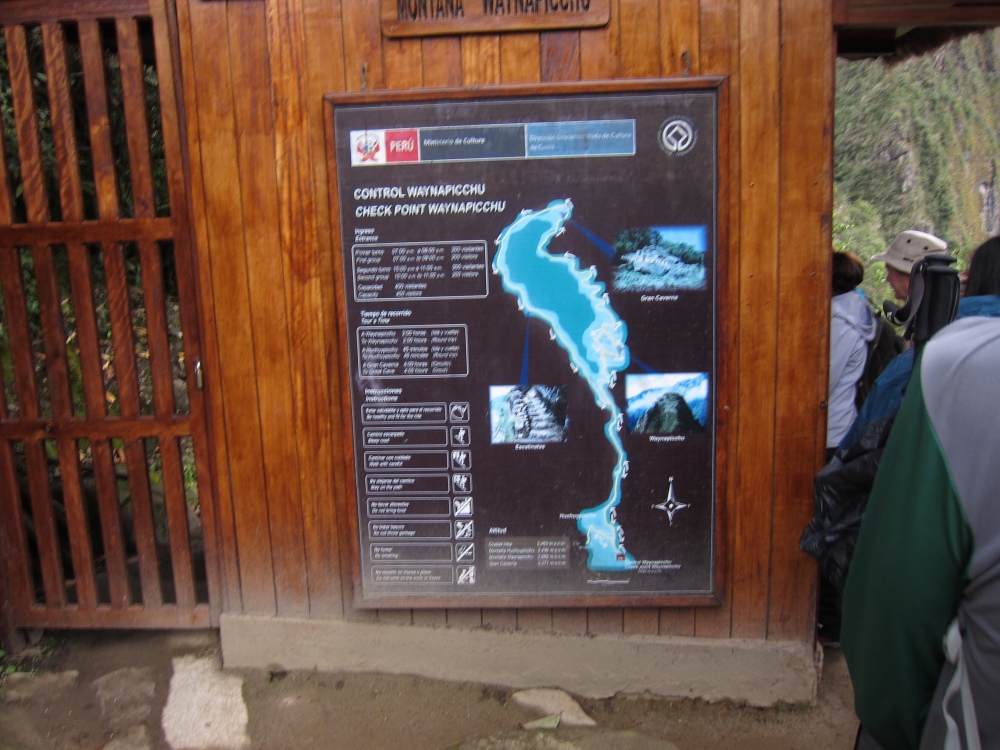 Before entering the trails of Wayna Picchu we had to sign in at a booth at the base of the mountain. We logged the time we entered and later would log the time leaving. Presumably this helps them track the people who fall to their deaths.

For most of the trek upward I was right behind our guide. He has made this climb hundreds of times, and his stability on the steps never ceases to amaze me. These stairs were different from the rest of the hike in that they had a railing, but he never once reached out a hand to it. He just gazed forward and stepped surely ever upward. I tried to mimic this for a time, and it worked for a bit, but eventually I, like the rest of my group, had to reach out for a hand-hold.

If you’ve ever seen terrifying pictures of people on stairs at Machu Picchu, those are actually in Wayna Picchu. It’s a challenging hike upward, but an even more heart-stopping trip down. I didn’t take photos on the way down because, basically, I was to focused on maintaining my balance. 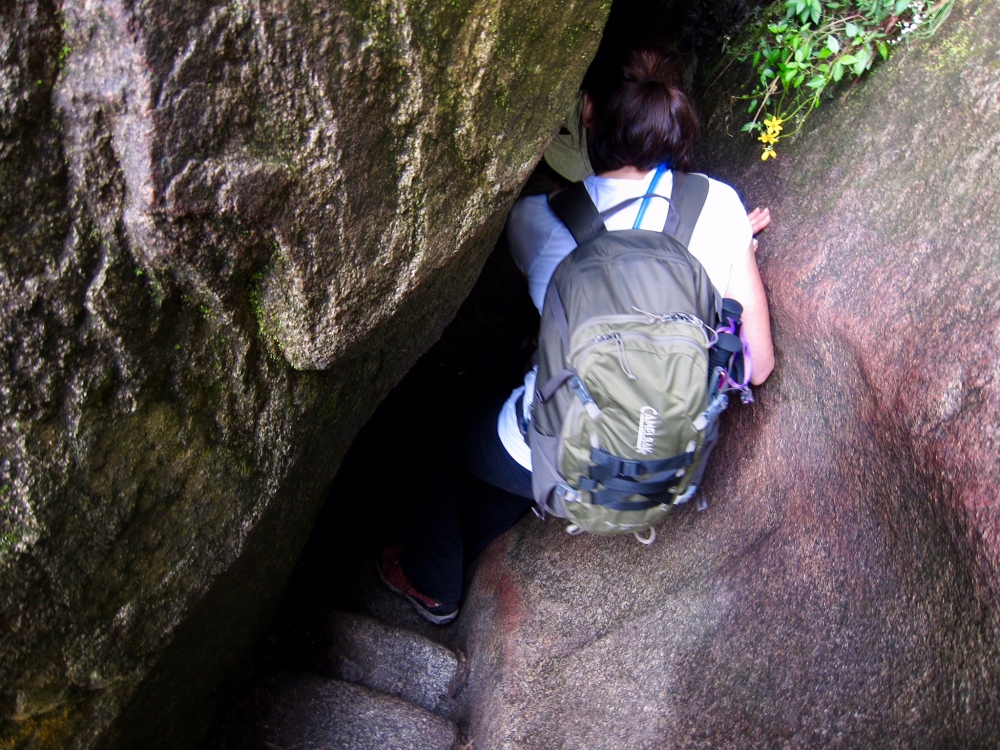 Beyond the stairs, near the top of the mountain there is a small, angled tunnel that visitors must navigate. 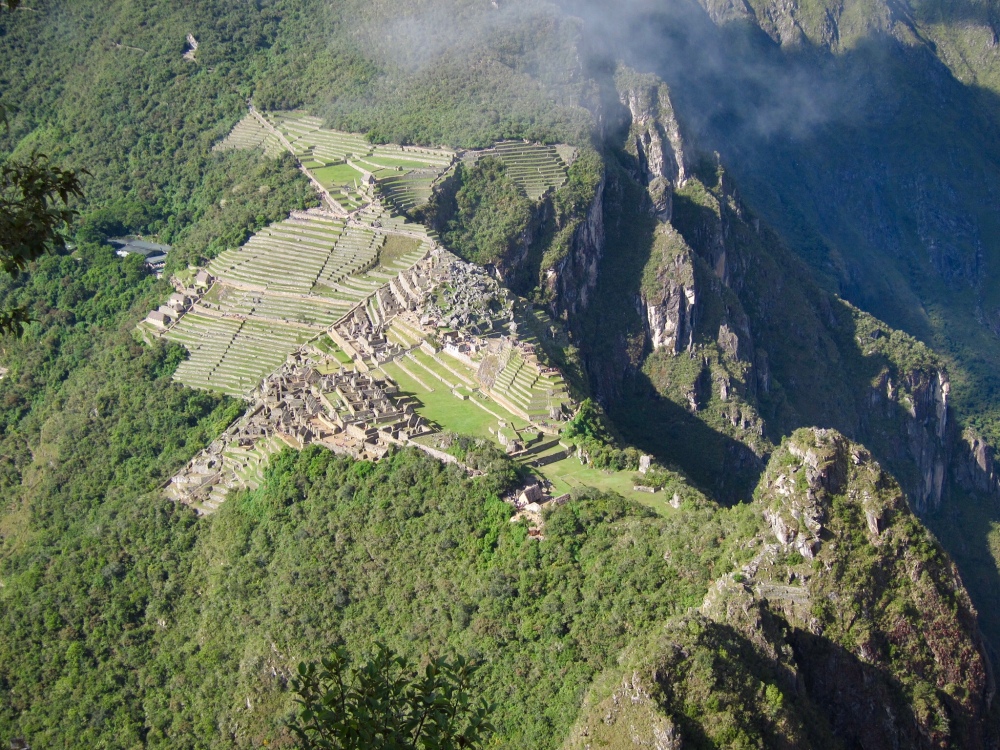 Still there are ample opportunities for photos.

Including this seat, which gives an unobstructed view Machu Picchu, below. That’s me, BTW. I’m breaking a personal rule by showing a photograph of myself in the blog, but this photo is worth it.

Back at ground level, I signed myself out of the mountain as having survived and congregated with the rest of the group. After stopping at the restrooms, our guide took us around the site.

Here we stand before the Temple of the Sun. It, like other similar temples here, is built on a foundation carved directly from the bedrock of the mountain. The precisely sculpted walls curve in a graceful arc, broken only by two windows that admit the light of the sun to mark the summer and winter solstices. The masonry work here is spectacular 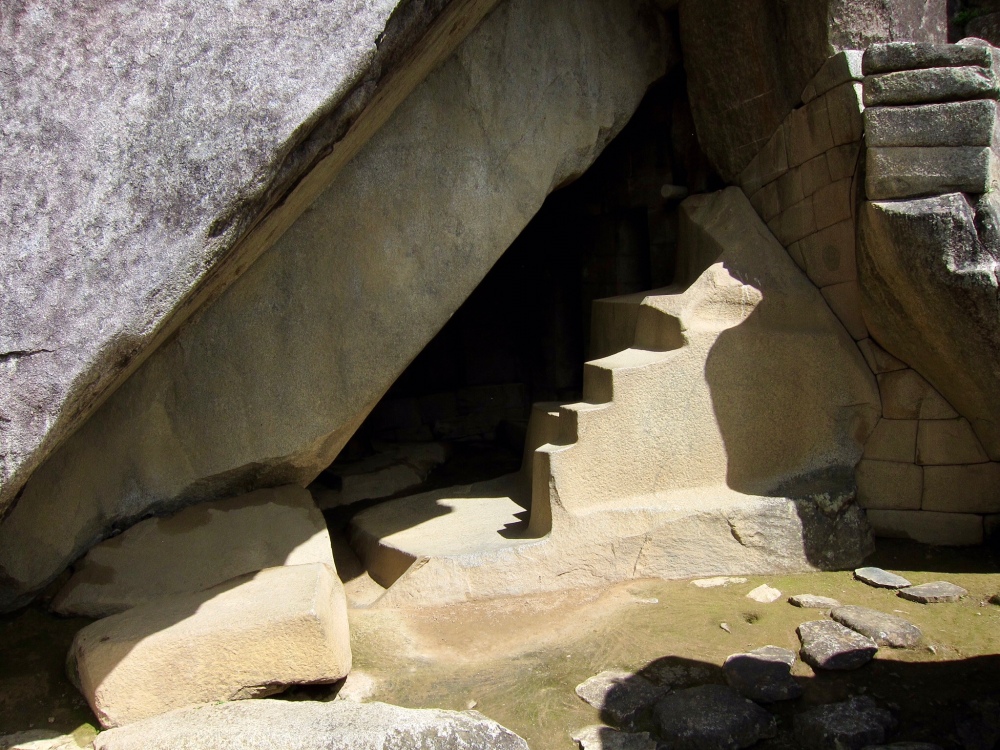 Below the Temple of the Sun is the Temple of Pachamama (Mother Earth), also carved directly from the bedrock. In case you are wondering, we aren’t permitted entry into either of these temples. 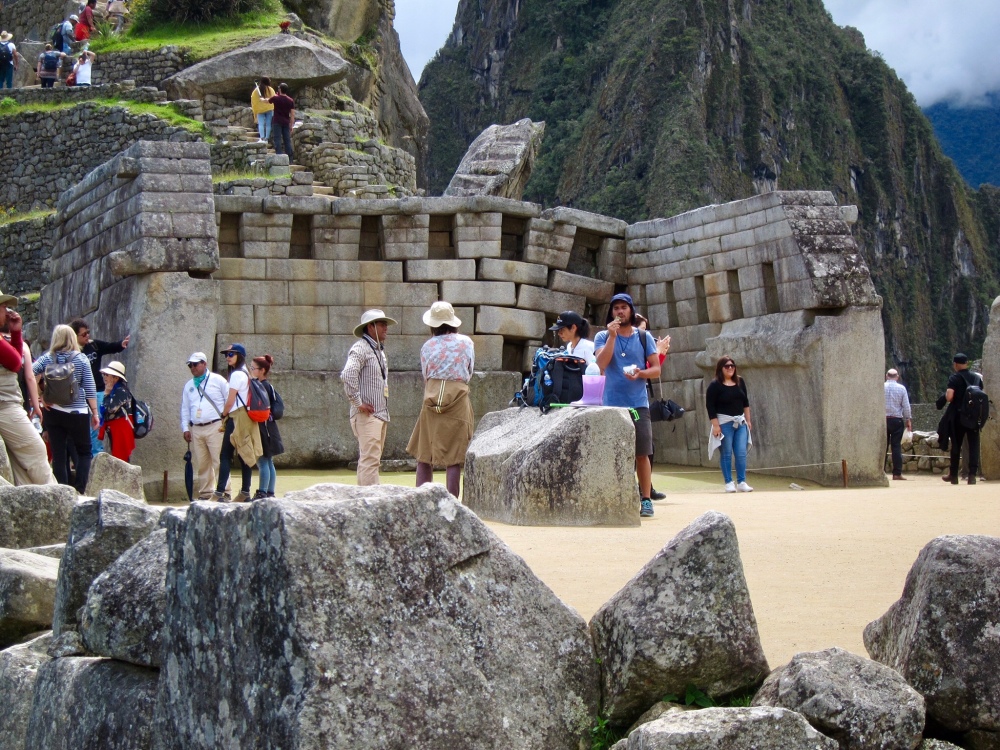 Higher up in Machu Picchu is the Main Temple. Our guide explained to us that it was never completed, as the corner became destabilized and began collapsing, and the Incan architects couldn’t repair it. 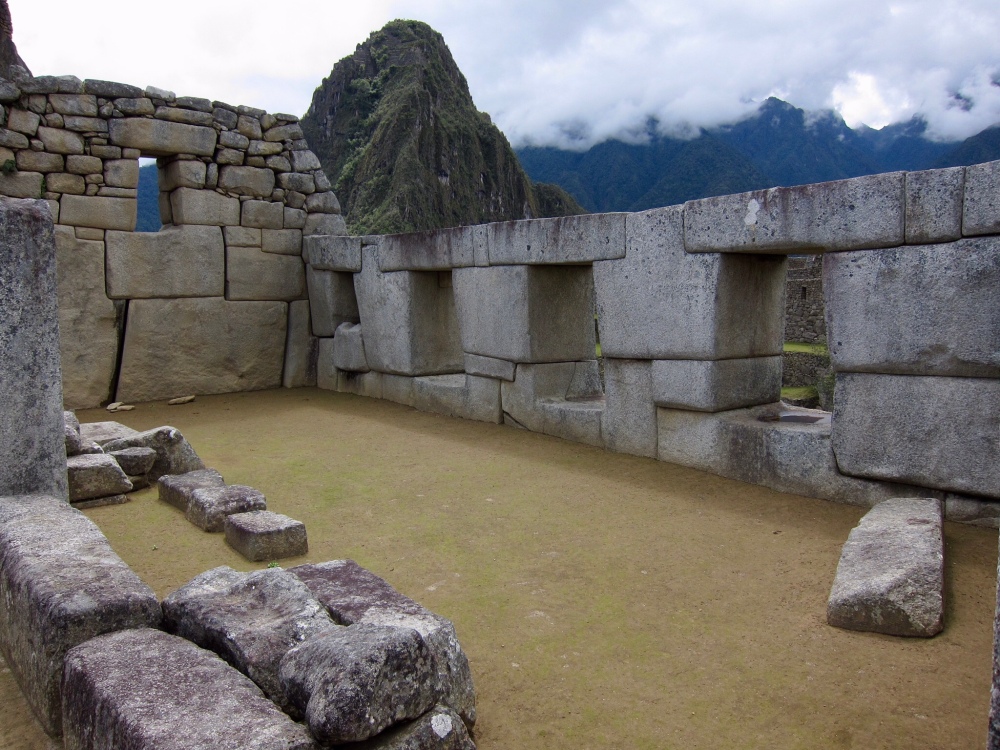 Here is the Temple of the Three Windows, named for its …. three windows. 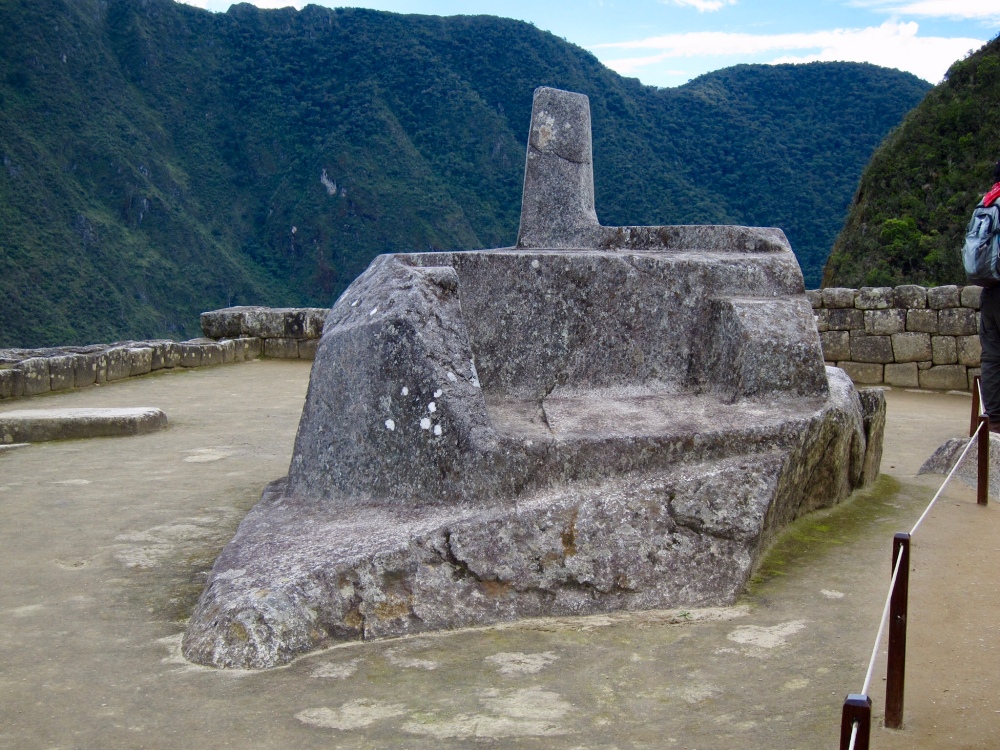 And finally, highest in the city is the sundial, sometimes called “the hitching post of the sun,” whose sides (or perhaps the apices – I’m not certain) point toward the four cardinal directions. It was used for astronomical observations, and there used to be many similar sundials scattered throughout the empire. The invading Spaniards, however, destroyed most of them, this one surviving only because it was lost.

We then navigated a bit further through the site, past the skeletal remains of buildings, and up and down terraces, before pausing in one of the buildings. Our guide handed us all three coca leaves, and invoked the Incan gods. We nestled our own leaves, with our personal prayers, under a stone and then moved on to the Temple of the Condor, lunch, and Machu Picchu Town.

There, we explored only briefly before boarding our train back to Ollantaytambo where we were met by our bus driver to took us to Cusco.